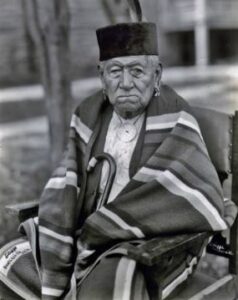 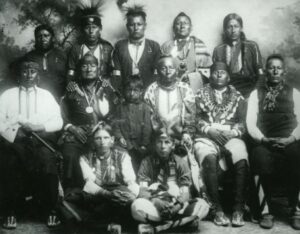 During the years when America was expanding very quickly, many Native American nations were placed on reservations, and the land they had previously lived on was taken from them…often by force, but sometimes by choice. Some Indians saw the writing on the wall and chose to go to the reservation so their people could survive. Those who didn’t found themselves in multiple battles that often ended in death.

One group, the Osage Tribe made the decision to abandon their lands in Missouri and Aransas, giving it to the White Man’s Government, in exchange for the reservation in Oklahoma that was offered to them. I’m sure there were those within the tribe who were not happy with the decision that was made, but time would prove that it was the wisest decision to make. The decision made at that time, would later make them one of the wealthiest surviving Native American nations. The Osage Tribe was, at one time, the largest tribe of the Southern Sioux people. They occupied what are now the states of Missouri, Kansas, and Nebraska. This sophisticated tribe of people surprised the first Anglo explorers and settlers. When the settlers moved into the region, they found this Native American tribe living in more or less permanent villages made of sturdy earthen and log lodges. They really didn’t expect these people, whom they considered to be primitive, to be in such modern-day (for the times anyway) homes. The Osage Tribe is related to the Quapaw, Ponca, Omaha, and Kansa peoples. Like their cousins the Plains Indians, the Osage Tribe hunted buffalo and wild game, but they also raised crops to supplement their diets. They were really forward thinking, which was unusual for the times.

Americans found it much easier to understand and negotiate with the Southern Sioux, even though they often warred among themselves. They felt like they could understand the Southern Sioux much easier, because of their more sedentary ways…thing that the more nomadic Northern Sioux just didn’t make sense in that they just seemed to wander around. The White Man didn’t understand that kind of thinking. Maybe it was the more permanent homes offered by the American negotiators, that convinced the Osage Tribe to abandon their traditional lands and move peacefully to a reservation in southern Kansas in 1810. Unfortunately, that would not be the move that made the White Man happy, so when American settlers began to covet the Osage reservation in Kansas, the tribe agreed to yet another move, relocating to what is now Osage County, Oklahoma, in 1872.

While the American settlers found it easier to work with the Osage Tribe and the Southern Sioux, they were not always truly fair with them. The American settlers constantly pressured the government to push Native Americans off valuable lands and onto marginal reservations. Unfortunately, this practice was all too common throughout the history of western settlement. Most tribes were devastated by these relocations, including some of the Southern Sioux tribes like the Kansa, whose population of 1,700 was reduced to only 194 following their disastrous relocation to a 250,000-acre reservation in Kansas. Nevertheless, the Osage tribe, proved unusually 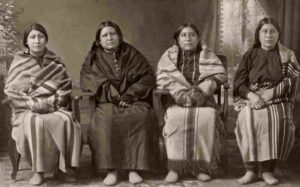 successful in adapting to the demands of living in a world dominated by Anglo-Americans. Of course, a big part of their success and wealth is due in part to the presence of large reserves of oil and gas on their Oklahoma reservation, as well as the effective management of the grazing contracts set up with the Anglos. During the twentieth century, the Osage amassed enormous wealth from their oil and gas deposits, eventually becoming the wealthiest tribe in North America.