A Man With A Gentle Spirit

I suppose I could be wrong, but I don’t recall ever seeing my uncle, Jim Richards get mad at anyone. He had always been a man with a gentle spirit, and one who is patient and kind to all the kids. I suppose his family might be able to sight a few times when I could be proven wrong, but I certainly don’t know of any. Uncle Jim is a quiet man, who could be just a little bit on the shy side, but when you talk to him, you can see the gentleness that lives inside him. He is soft-spoken and always there to help anyone who has a need. Many people would equate him to a big teddy bear, and I would have to agree with them. Uncle Jim has just that kind of personality.

Uncle Jim is a very caring man. He is always willing to help anyone who needs his help. He has taken care of various family members over the years, especially his mom. Uncle Jim’s dad passed away when he was young, and only a year after one of his brothers was killed during the D-Day invasion at Normandy, France. Uncle Jim’s caring spirit took over then, and he did whatever he could to help his mom and the rest of his siblings. He was just a young boy at the time. From that day forward, Uncle Jim worked very hard to do things in his life that he knew would make is dad proud of the man he was to become. he could have decided that since his dad was gone, he could act out, but he didn’t. He showed respect for his dad, by taking care of his mom, working hard, and taking care of others too. I can almost picture his 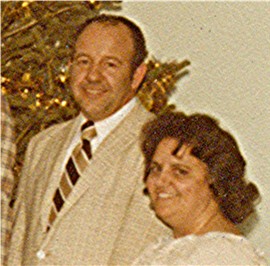 dad looking down from Heaven on his son and smiling with pride at just how great he turned out. It’s definitely something to be proud of.

When Uncle Jim married my Aunt Dixie, he became my uncle, and a beloved member to our family. He has taken great care of his family, being there to help with transport of the grandchildren, and paying bill when his kids were at work and couldn’t get there to pay them. He helped out when Aunt Dixie ran a daycare and helped with the animals they had on their little place in the country. Uncle Jim was always someone that the family could count on, and we are all glad he is a part of our family. Today is Uncle Jim’s 85th birthday. Happy birthday Uncle Jim!! Have a great day!! We love you!!