The Wreck Of USS Perry 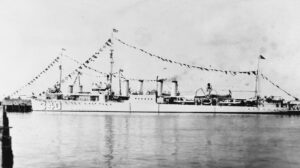 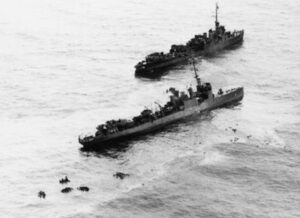 Quite likely one of the most brutal kinds of bombs was the mine. These mostly submerged orbs could take out an unsuspecting ship the minute it made contact with it, usually with no warning at all. So great was the danger to ships in the area, that the nations started building ships for the express purpose of seeking out these mines and destroying them before they were able to destroy a ship in the area. One such ship, the USS Perry was built by Mare Island Naval Shipyard at Mare Island. It was laid down September 15, 1920 and launched October 29, 1921. Named in honor of Oliver Hazard Perry and sponsored by Miss Anne R Scudder, it was commissioned August 7, 1922, with Lieutenant Richard H Booth in command, but it wasn’t initially designed to be a minesweeper.

Nearly 20 years after the ship was commissioned, the ship was converted to a minesweeper and redesignated DMS-17 on November 19, 1940. This particular ship was the third of eight ships that would be named after Oliver Hazard Perry, which seems to me, rather unheard of, but maybe not. After becoming a minesweeper, the USS Perry (DMS-17) had an illustrious career for almost four years. Veteran Lieutenant JG Charles L Ennis told of his time on the ship, saying, “My battle station was on the Flying Bridge and I saw mines. The proximity of these deadly orbs certainly prevented any rescue ship from effective aid particularly since many of the crew were in the water and would been killed had another mine been exploded.” It was his job to see the danger before it could take down the ship. Of course, they captain knew that it was just as likely that the ship would find the mine when it hit the mine as it was to see it beforehand.

That was exactly the case, when on September 14, 1944 (one day short of the 24th anniversary of the ship being laid down on September 15, 1920), the USS Perry hit a mine at 2:07pm, and sank to the bottom roughly 700 yards south of Angaur Island in less than two hours. Larry Tunks was firing anti-aircraft guns aboard the 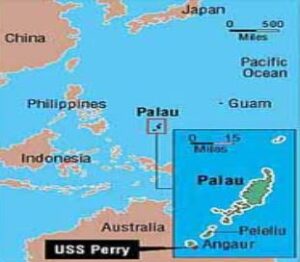 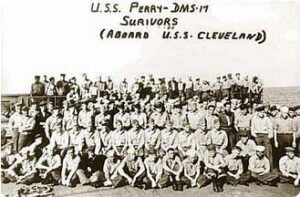 USS Perry when it scraped a mine off Angaur Island, exploding a boiler and killing eight crewmen. One of those killed was his closest ship buddy, a fellow Nebraskan. Another 146 men were plucked from the ocean by US warships in the area. The USS Perry lay undiscovered at the bottom of the Pacific Ocean until it was found on May 1, 2000 by Fish ‘n Fins, owner Navot Bornovski on a 240’ bottom. Navot and Padi Owdi, Jeff Wonnenberg were the first to dive the wreck.