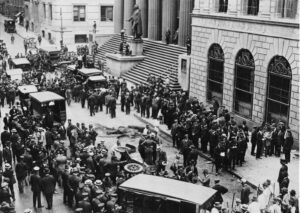 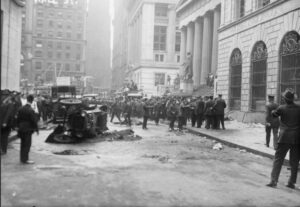 Acts of terrorism somehow seem to be a normal possibility in the times we live in, but are they just a phenomenon that exists in our current era? Not really. While they may have been to a lesser degree, these kinds of things have been around fora long time. On September 16, 1920, during a busy day on Wall Street, New York was hit by an unforeseen event. Bankers and stockbrokers were bustling around with an average day in the financial world. Then, as the church bells struck 12 noon, 100 pounds of dynamite detonated in front of the Assay Office.

Concealed in a horse-drawn wagon that had been parked for some time in front of the Assay Office, the bomb suddenly exploded. An employee of J.P. Morgan, Andrew Dunn said, “That was the loudest noise I ever heard in my life. It was enough to knock you out by itself.” The normally businesslike street was instantly transformed into what looked more like a battlefield than a financial district. There was debris, blood, and charred bodies everywhere. Thirty men and women lost their lives instantly. Eight more would die of their injuries later on. Hundreds of people were injured with many of them getting serious burns.

At the site of the 1920 Wall Street bombing, pock marks from the bomb are still visible to this day. Apparently, there was some warning of the impending attack, because a day after the attack, postal workers uncovered flyers that have been dropped into the mailboxes in Wall Street. The flyers read, “Remember, we will not tolerate any longer. Free the political prisoners, or it will be sure death for all of you.” It was signed the American Anarchist Fighters. Authorities immediately suspected the Galleanists, a gang of anti-government Italian anarchists led by Luigi Galleani, but unfortunately, they could not uncover any evidence to charge them with the crime. While the FBI had numerous leads, they couldn’t come close to any significant evidence. The investigation went on for years and was finally delegated a cold cast with the last known investigation taking 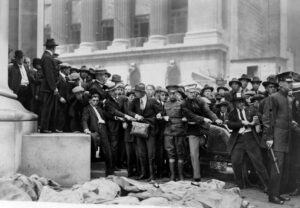 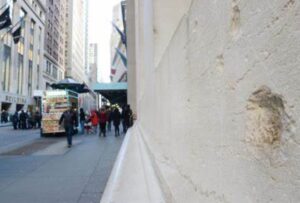 place in 1944. Finally, the FBI concluded that the explosion was most likely caused by “Italian anarchists or Italian terrorists.” Nevertheless, they could not prove anything, and no one was ever charged with the crime. Mario Buda, a Galleanist, was considered as a likely suspect, but with no proof, he was never charged. No one has ever claimed responsibility for the attack even after 102 years.