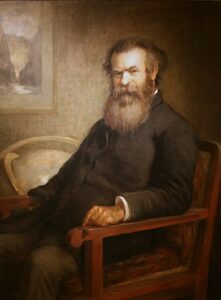 John Wesley Powell was an American geologist, US Army soldier, explorer of the American West, professor at Illinois Wesleyan University, and director of major scientific and cultural institutions. As if that accreditation wasn’t enough, Powell was most famous leading an 1869 geographic expedition. The expedition was a three-month river trip down the Green and Colorado rivers, which included the first official US government-sponsored passage through the Grand Canyon. While it was successful, the expedition was not without issue. During the trip, three men became convinced that they would have a better chance surviving the desert than the raging rapids that lay ahead of them. So, a bit of a mutiny ensued, in which the three men left Powell’s expedition through the Grand Canyon and decide to scale the cliffs to the plateau above.

As with many mutinies, the men quickly found out that they didn’t necessarily know as much as they thought. In fact, theirs was a serious mistake. Still, their fears were not totally unfounded. The men feared that the plan to float the brutal rapids was suicidal. To make matters worse, Powell was a one-armed Civil War veteran and self-trained naturalist. One arm and those rapids could prove catastrophic. Powell was, however, accompanied by 11 men, which could have helped, but they were in four wooden boats, meaning that all hands were needed. Powell was fearless, and he led the expedition through the Grand Canyon and over punishing rapids that many would hesitate to run even with modern rafts. 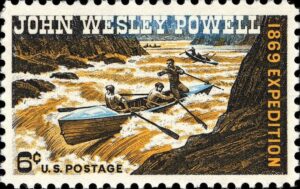 For the group, the worst was yet to come. Near the lower end of the canyon, the party heard the roar of giant rapids. They decided to explore the situation further, before they took that plunge. The party moved to shore, and then walked down river to explore the river first. The men saw was could only be referred to as “the worst rapids yet” and Powell agreed, writing that, “The billows are huge, and I fear our boats could not ride them…There is discontent in the camp tonight and I fear some of the party will take to the mountains but hope not.”

Overnight, the fears grew, and the next day, three of his men left to take their chances in the desert above, because they were sure that the rapids an impossible barrier for the boats. So, on August 28, 1869, Seneca Howland, O G Howland, and William H Dunn said goodbye to Powell and the other men and began the long climb up out of the Grand Canyon. The rest of the party mustered their courage, climbed into the boats, and 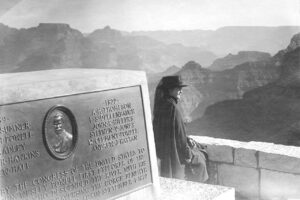 pushed off into the wild rapids.

Amazingly, all of the river crew survived, and the expedition emerged from the canyon the next day. The three men who left the group were not so fortunate. Upon reaching the nearest settlement, Powell learned that the three men who left the group, had encountered a war party of Shivwit Indians and were killed. While the killings overshadowed the excitement of the successful expedition, the next expedition through the Grand Canyon in 1871, was much better funded than had been the first. I suppose knowing that it can be done, made it easier to donate to the second trip.