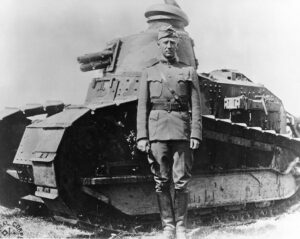 There are men of war, and then there are men of war. United States General George S Patton was the latter…meaning that he almost lived for war. Patton was a man who came from a long line of military people, and while he wasn’t always a tactful man, he was a great warrior…a fact that he proved over and over again. Many people didn’t like him much, but they couldn’t deny his capabilities. Patton was a great leader, but he wasn’t really a people person, and that got him in some trouble.

George Smith Patton Jr, who was born to George Smith Patton Sr and his wife, Ruth Wilson, the daughter of Benjamin Davis Wilson on November 11, 1885, in San Gabriel, California. Maybe because of his family history, or maybe it was just him, but Patton never seriously considered a career other than the military. At the age of seventeen he tried for an appointment to the United States Military Academy at West Point, New York. He also applied to several universities with Reserve Officer’s Training Corps programs, and was accepted to Princeton College, but eventually decided on Virginia Military Institute (VMI), which his father and grandfather had attended. Later, after studying at West Point, he served as a tank officer in World War I. Patton loved the tank, and his time as a tank officer, as well as his military strategy studies led him to become an advocate of the crucial importance of the tank in future warfare. When the United States entered World War II, Patton became the logical choice for the command of an important US tank division, and his division played a key role in the Allied invasion of French North Africa in 1942. Then, in 1943, in the Allied assault on Sicily, Patton and the US 7th Army in its assault on Sicily and won fame for out-commanding Montgomery during their pincer movement against Messina. Patton loved competition, and this was his chance to shine. On August 17, 1943, Patton and his 7th Army arrived in Messina several hours before British Field Marshal Bernard L Montgomery and his 8th Army, winning the unofficial “Race to Messina” and completing the Allied conquest of Sicily.

Although Patton was one of the most capable American commanders in World War II, he was also one of the most controversial. Patton was a “pull yourself up by your bootstraps” kind of guy, and therefore had no personal understanding of fear or fatigue. PTSD, battle fatigue, or shell shock were conditions he could not accept in anyone. In fact, they infuriated him so much that he actually slapped two soldiers who were suffering with the conditions. During the Sicilian campaign, Patton generated considerable controversy when he accused a hospitalized US soldier suffering from battle fatigue of cowardice and then personally struck him across the face. The famously profane general was forced to issue a public apology and was reprimanded by General Dwight Eisenhower. They would have liked to “walk away” from Patton, but when it came time for the invasion of Western Europe, Eisenhower couldn’t find a general as formidable as Patton, so, once again Patton was granted an important military post. In 1944, Patton commanded the US 3rd Army in the invasion of France. Then, in 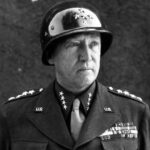 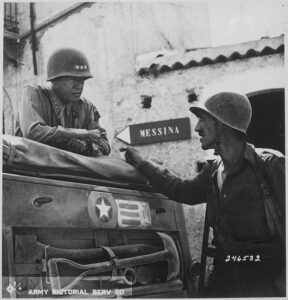 December of that year Patton’s great expertise in military movement and tank warfare helped to crush the German counteroffensive in the Ardennes.

During one of his many successful campaigns, General Patton was said to have declared, “Compared to war, all other forms of human endeavor shrink to insignificance.” Patton died in a hospital in Germany on December 21, 1945, from injuries sustained in an automobile accident near Mannheim. He was just 60 years old.