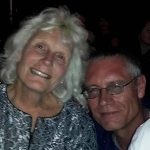 As another year has come and gone, I find myself again saddened that our cousin, Larry Hein is no longer with us. How could it be that he has been in Heaven now for almost a year and a half? Larry was a wonderful son, brother, and dad. He was also a successful businessman in Forsyth, Montana, and many people in town were helped by his mechanical ability and his towing business. Life wasn’t always easy for Larry. He lost his wife to an auto accident and was left to raise his children alone. He did a good job with that, and by the time he went to Heaven, his youngest child, Destiny was almost grown, and his son, Dalton was a grown man. I know they were so sad that he was no longer with them, but they were also grateful that they had him for most of their childhood years. 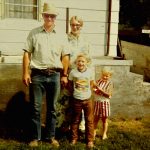 I remember Larry as a young boy, because I married his cousin, Bob when Larry was just six years old. He was a good boy, and when my own children, Corrie Petersen and Amy Royce came along, Larry would go out to the playhouse on Grandma and Grandpa Hein’s house, and even though he was a boy, he was willing to playhouse with the girls, because they needed a “daddy” for the “family” game they were playing. While I’m sure Larry was quite bored, he was a good sport, and took it all in stride, even to caring for the baby dolls they were using for the kids. 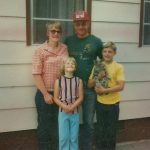 Larry loved being out at Grandma Hein’s house, as we all did. There was always something to do and everyone had a great time. Grandma and Grandpa made life a big game…even if the kids were actually helping with the chores. And, they learned responsibility and good values, because they really did help around the ranch. They also got to ride the horses and help with the other animals that were being raised. Larry was a good help, as were the other kids, and they were all a blessing to Grandma and Grandpa Hein. Tody would have been Larry’s 53rd birthday. Happy birthday in Heaven, Larry. I know you are all celebrating there. We love and miss you very much.

One Response to Playing Daddy