The job of marking out the boundaries of a property, much less an entire nation, while maybe not a complicated job, a big job, nevertheless. The 19th century surveyors were charged with the job of mapping out the entire United States, and to me, that is a huge undertaking. These men were more than just surveyors. These men were the unheralded vanguards of the Old West. They established original geographical boundaries and retraced and identified existing borders in accordance with legal descriptions. It is said that they were part-astronomers, part-geologists, part-engineers, and these mapmakers were also arbitrators when land lines were in dispute. Several wars, and many smaller feuds have been fought and people killed over boundary disputes, and sometimes the surveyor had to be called in to settle the matter.

Some famous men that we all know started out as surveyors. Men like George Washington, Thomas Jefferson, Abraham Lincoln, Meriwether Lewis, William Clark and Daniel Boone When these men were surveyors, actually risked their lives in the line of duty to map what ultimately became the passes, railroads, towns, dams and other structures that helped form the backbone of the West.

Surveyors were the ones who shaped Western history. Their endurance, sense of adventure, and knowledge of precision tools and mathematical principles became the tools of their trade. In fact, they really became Jocks of all trades. While surveying the many miles of the United States, the had to actually blaze trails, so they had to become woodsman, so they could get through some areas to even begin surveying the borders. They became experts in the science of soil management and crop production. As agronomists they worried that hot weather, combined with dry conditions, can hamper pollination. They had to understand the soil and botany. They had to find their food in the wild, because there weren’t any stores in the rugged, wilderness they were mapping.

It was a hard job, and there were many risks, but these men were strong-willed, and determined…and sometimes their lives were on the line. In 1838, came one of the first incidence of a surveyor being killed. It happened just two years after the Battle of San Jacinto…a battle in which the Texians defeated Mexican General Antonio López de Santa Anna. While surveying on the Guadalupe River north of San Antonio, Indians attacked a survey party and killed nine of the crew, including one surveyor who managed to carve his name, “Beatty,” on a tree before he died. At least seven more survey parties were attacked that spring and summer, from the Rio Frio to the Red Sometimes River. 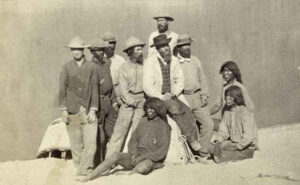 that track lines. They had to make sure they were not overtaking the landowners’ boundaries. The Indians were the main people to fight the surveyors, because they could see more and more of their land being confiscated. What would eventually be good, even for them, was seen as theft to them, and maybe it was, but when we look to the future, it’s easy to see that the land was going be essential to the people of the United States down the road. Nevertheless, the surveyors faced many dangers and really also had to be soldiers, because they were often in a fight for their lives, as they did their work. Surveyors were, and still are, essential to the ever-changing boundry lines in our nation, but that doesn’t make their job an easy one.