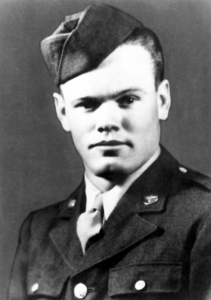 World War II was coming to a close and everyone was just doing whatever they could to stay alive. Staff Sergeant Henry E “Red” Erwin Sr was the radio operator on a B-29 Superfortress bomber, piloted by Captain George A “Tony” Simeral. Formed at Dalhart, Texas, in June 1944, and deployed overseas in January 1945, this was a seasoned crew. Erwin’s unit was the 52nd Bombardment Squadron, 29th Bombardment Wing, and Erwin’s B-29 was one of the few planes in Major General Curtis E LeMay’s XXI Bomber Command to have two names. The B-29, serial number 42-65302, was called Snatch Blatch and The City of Los Angeles. On April 12, 1945, the crew was on a bombing mission over Japan. They were part of a campaign to bomb Tokyo and other major Japanese cities.

Each of the 12 crew members on the B-29 had additional duties to perform, along with their primary jobs. Erwin’s was to drop phosphorus smoke bombs through a chute in the aircraft’s floor when the lead plane reached a designated assembly area. During the campaign, Erwin pulled the pin and released a bomb into the chute, but the fuse malfunctioned and ignited the phosphorus prematurely, burning at 1,100 degrees. The canister flew back up the chute and into Erwin’s face, blinding him, searing off one ear and obliterating his nose. Phosphorus pentoxide smoke immediately filled the aircraft. It was impossible for the pilot to see his instrument panel. At such a high heat, Erwin was afraid the bomb would burn through the metal floor into the bomb bay. Nevertheless, Erwin had a quick, fleeting chance to save the lives of his fellow crewmembers by risking severe, probably fatal, burns to his own body, and he knew he had to act. He was completely blind, and yet he picked up the flare and feeling his way, crawled around the gun turret and headed for the copilot’s window. His face and arms were covered with ignited phosphorus and his path was blocked by the navigator’s folding table, hinged to the wall but down and locked. By now the navigator was setting up to make a sighting. The table’s latches could not be released with one hand, so Erwin held the white-hot bomb between his bare right arm and his ribcage. It only took a few seconds to raise the table, but by then, the phosphorus had burned through his flesh to the bone. His body on fire, he stumbled into the cockpit, threw the bomb out the window and collapsed between the pilot’s seats, and with that heroic act, the rest of the crew was saved.

It was the moment of truth for Erwin, who was a modest, humble kind of guy. His thoughts on his heroic actions would have been something along the lines of, “I just did what any soldier would have done…it’s nothing special,” but the truth is, it was something very special and very heroic. Red Erwin came to the war zone as one of thousands of B-29 crewmembers placed in the North Pacific, on the Marianas islands of Guam, Saipan, and Tinian for the purpose of attacking Japan. The American taxpayer had equipped them with the largest and costliest aircraft of the war, the first large combat plane to be pressurized, enabling the crew to dispense with heated clothing and oxygen masks and to work in shirtsleeves, a fact that also put Erwin in an even more vulnerable position, because his skin was less protected than it would have been in a coat.

Erwin survived his burns. He was flown back to the United States, and after 30 months and 41 surgeries, his eyesight was restored, and he regained use of one arm. He received a disability discharge as a master sergeant in October 1947. In addition to the Medal of Honor and two Air Medals received earlier in 1945, he was also awarded the Purple Heart, the World War II Victory Medal, the American Campaign Medal, three Good Conduct Medals, the Asiatic-Pacific Campaign Medal with two bronze campaign stars (for participation in the Air 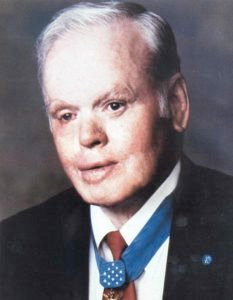 Offensive Japan and Western Pacific campaigns), and the Distinguished Unit Citation Emblem. He was a remarkable soldier.

For 37 years, Erwin served as a benefits counselor at the veterans’ hospital in Birmingham, Alabama. In 1997, the Air Force created the Henry E Erwin Outstanding Enlisted Aircrew Member of the Year Award. It is presented annually to an airman, noncommissioned officer and senior noncommissioned officer in the flight engineering, loadmaster, air surveillance and related career fields. It is only the second Air Force award named for an enlisted person. Henry Erwin, despite his scars and wounds, went on to lead a typical life… marrying, raising children, and becoming a grandfather. But there was nothing “typical” about Red Erwin. “Red” Erwin died at his home on January 16, 2002, and was buried at Elmwood Cemetery in Birmingham, Alabama. His son, Hank Erwin, became an Alabama state senator.