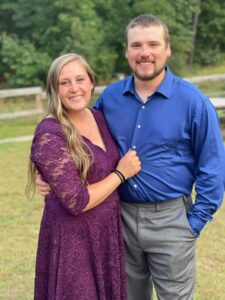 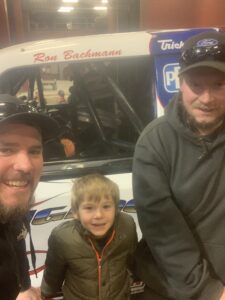 When you live on a farm, with multiple animals, the work never ends. My nephew, Eric Parmely married a girl named Ashley, who was raised on a farm, and they are on a life journey that is probably pretty unusual in this day and age. They bought a farm west of Casper, Wyoming, and they both work very hard raising horses, cows, goats, pigs, turkeys, and chickens, not to mention dogs and cats. The baby count grows every year, and of course, the animals supply the family with meat, eggs, milk, and of course, love…especially from the dogs and cats, but from the other animals too.

Eric’s workday doesn’t really end until his head the pillow. Eric is always working on something. Eric and Ashley host a family dinner for our families once a month, and after dinner, the work must usually go on. Sunday when we were out there, he and several of the men were out working on his 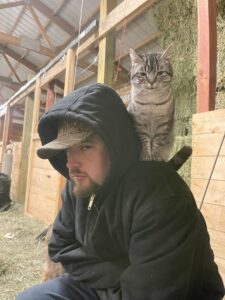 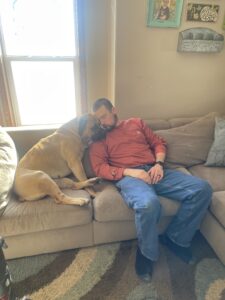 tractor. You can’t run a farm without a tractor, and there is always something that needs done on it…either repairs or maintenance. Then he and Ashley have jobs like milking the cow and the goats, feeding all the animals, and stacking hay (when they buy bales).

Eric is a great daddy. He gives the best “daddy horse” rides and tickles…which we all know is very important…especially the tickles to his kids, Reagan, Hattie, Bowen, and Maeve!! He is always helping Ashley with the household chores and is an expert at washing dishes and folding laundry. You might say he has dozens and dozens of babies, because he also loves to snuggle the kittens and puppies, and he helps pull calves. Eric really has a heart of gold and is filled with love for his kids, wife, and animals.

In the little bit of down time he has, Eric likes to watch videos on YouTube on his phone and giggles to himself. 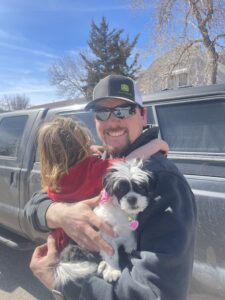 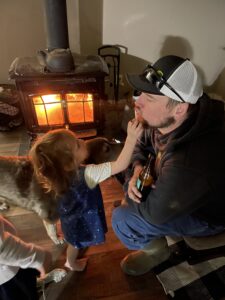 He rather reminds me of his Uncle Bob in that way. It doesn’t matter if it’s on television or his phone, Bob gets a kick out of comedy, just like Eric. It’s fun to listen to their laughter from the other room, and ultimately, you can’t help but laugh along, even if you don’t know what is so funny. Just hearing their laughter is contagious, and you find yourself laughing along…or at the very least smiling. Ashley tells me that Eric is still a mama’s boy, and that is likely true. I think Eric would help his mom, Jennifer Parmely and her partner, Brian Cratty with anything they needed, and I think he would help his in-laws, Kari and Albert Eighmy with anything they needed too. That’s just the kind of guy Eric is. Today is Eric’s birthday. Happy birthday Eric!! Have a great day!! We love you!!