The Cost Of Courage 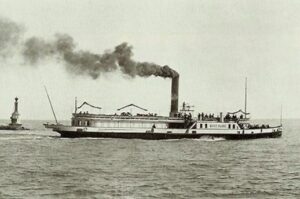 Disaster was eminent that December 6, 1917, and indeed, the disaster had already begun, but it was very likely to get far worse. Vincent Coleman and his co-worker, Chief Clerk William Lovett were working at the Richmond station where they received word that there was a crash between the French munitions ship, SS Mont-Blanc, and a Norwegian ship, SS Imo. A collision, in and of itself, would not have been any more serious than any other collision, except that the French munitions ship, was carrying a deadly cargo of high explosives. The likelihood of an explosion was the eminent disaster that was waiting to happen.

That day, in what was called the Halifax Explosion, Coleman is remembered as one of the heroic figures, because of his quick-thinking message to an oncoming train to stop and remain out of range before the explosion. Coleman knew what was coming, and he saved many lives as a result of holding back that train. born on March 13th, 1872, was a train dispatcher for the Canadian Government Railways. Moments after the collision, the SS Mont-Blanc caught fire and the crew abandoned the ship. Now it was up to Vincent, trying to hold back a sense of panic, to figure out what trains were going to be coming into Halifax. He knew they had to be warned.

Part of the reason for such a panicked state was that the French ship had drifted from the middle of the channel to the pier. While still burning, she beached herself on the shore in a matter of minutes. The captain warned Coleman of the deadly cargo on the ship, and Coleman flew into action. He immediately sent a telegraph to the Number 10 overnight express train that was coming in from Saint John, New Brunswick, carrying over 300 passengers, telling them to stop where they were and remain there until further notice, thereby saving the lives of passengers and crew. Then, Lovett and Coleman quickly evacuated their station, but Coleman couldn’t stay

away. There was too much danger. Coleman returned to the station and continued to warn trains all the way to Truro in order to stop them from any closer to the scene. Coleman’s morse was code message was this: “Hold up the train. Ammunition ship afire in harbor making for Pier 6 and will explode. Guess this will be my last message. Good-bye boys.” While Coleman’s message stopped the Number 10 train, saving the lives of 300 people, and also likely saved other lives with his warnings to stay back, he lost his own life in the endeavor when the ship exploded. Staying at the station was a courageous act that cost Coleman his life.