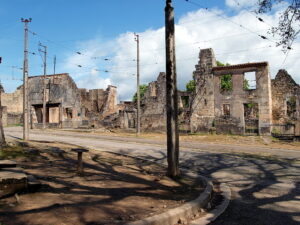 During World War II, the Nazis had a little problem…the resistance. Of course, the resistance had to be very careful, and stay in hiding much of the time. There were informants, the police, and the enemy soldiers to watch out for. It was hard to tell sometimes who was an enemy and who was a friend. Every day was spent in hiding, and often in fear for their lives.

With the Allied invasion of Normandy, the French resistance saw an opportunity to really increase their activity in the area. Of course, there were more fighter pilots in need of an escape routes, and soldiers who were wounded, but they also saw a way to strike back. One such way was to kidnap and kill Helmut Kampfe, a major in the Waffen-SS Das Reich. Of course, all resistance action came at a cost. Following the killing of Kampfe, a battalion of the regiment known 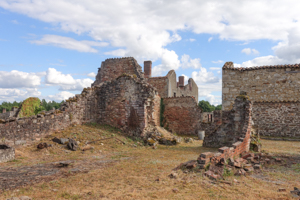 as Der Fuhrer Regiment was sent to the small village of Oradour-sur-Glane.

Of course, the village was innocent, but someone had to pay so Commander Adolf Diekmann ordered the town sealed off, the men locked in barns, and the women and children confined to the church. Nobody knows why the town was chosen for this attack. Maybe it was due to the town’s proximity to the regiment, or maybe it was because the Germans knew the village was defenseless. Whatever it was, it was about to get brutal.

Diekmann ordered his unit to begin shooting. It was like a terrorist attack. The residents were first incapacitated by gunshots to the legs. When they 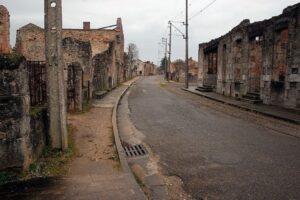 were unable to move, the barns and church were doused with gasoline and ignited. Hundreds of the villagers died that day, nearly all the residents of the area. Many of the SS who were there that day were Alsatian French nationals who had been forced into the German military, and almost all them escaped punishment, which is a crime in itself. After World War II, French president Charles De Gaulle declared that the village was never to be restored. It was to stand as it was after the attack, as a reminder of the brutal Nazi occupation. Brutality like that should never be forgotten, and maybe the evidence should stand as a reminder of the evil that exists in some people. Lest we forget.