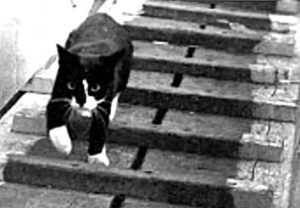 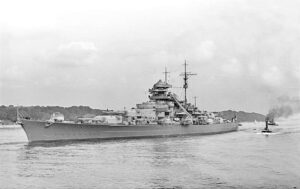 Animals have been used in most wars for different purposes. Some animals were messengers, like the carrier pigeon. Some were for warning, like the dog, which also served as a soldier in a fight situation. They are very loyal, and will do their best to save their master. These types of animals were to be expected to a degree, but during World War II, there was a certain cat, named Oscar, also known as Oskar, and ultimately known as Unsinkable Sam, because this cat managed not only to serve in both the Kriegsmarine, but also the Royal Navy. The cat’s original name is unknown, but the name “Oscar” was given by the crew of the British destroyer HMS Cossack, when that crew rescued him from the sea following the sinking of the German battleship Bismarck. The name “Oscar” was given to the cat, and was derived from the International Code of Signals for the letter ‘O’ which is code for “Man Overboard” (the German spelling “Oskar” was sometimes used since he was a German cat). For Oscar to survive the sinking of the Bismarck was amazing, but it was not the end of his story.

As you know, war is a tough time to be on a ship. There is no guarantee that the ship will make it through the war, and if a ship goes down in a battle, it usually takes some, if not all of the crew with it. A cat would usually have little chance of survival on a ship that is sinking, but someone forgot to tell Oskar that. Oskar was a black and white patched cat. It is thought that he was originally owned by one of the crewman of the German battleship Bismarck and was on board the ship on May 18, 1941 when the ship set sail on Operation Rheinübung (German for Rhine Exercise). It was the Bismarck’s only mission. On May 27, 1941, the Bismarck was sunk after a fierce sea-battle. The sinking took with it most of the crew. Out of a crew of 2,100 men, only 115 from her crew survived…and one cat. Hours after the sinking, Oscar was found floating on a board and picked from the water by the British destroyer HMS Cossack.

The crew of the Cossack decided that since Oscar was used to being on a ship, he could just stay with them. So, Oscar “served” on board Cossack for the next few months as the ship carried out convoy escort duties in the Mediterranean Sea and north Atlantic Ocean. On October 24, 1941, Cossack was escorting a convoy from Gibraltar to Great Britain when she was severely damaged by a torpedo fired by the German submarine U-563. The surviving crew were transferred to the destroyer HMS Legion, and an attempt was made to tow the badly listing Cossack back to Gibraltar. Unfortunately, the weather was not cooperative, and as it worsened, the task became impossible and had to be abandoned. On October 27, a day after the tow was slipped, Cossack sank to the west of Gibraltar. The initial explosion had blown off one third of the forward section of the ship, killing 159 of the crew, but Oscar survived, and was taken to Gibraltar. To say that a cat has nine lives is almost an understatement when it came to Oscar.

Following the sinking of Cossack, Oscar was given the nickname “Unsinkable Sam” and was soon transferred to the aircraft carrier HMS Ark Royal, which by coincidence was instrumental in the destruction of Bismarck, along with Cossack. This assignment was not going to prove safer for Sam, and one might begin to wonder if he should be given another shore assignment…for the sake of the ships. When the Ark Royal was returning from Malta on November 14, 1941, it too was torpedoed, this time by U-81. Again they attempted to tow Ark Royal to Gibraltar, but they were unable to stop the inflow of water, so the attempt was futile. The carrier rolled over and sank 30 miles from Gibraltar. The good news was that due to the slow rate of the sinking, all but one crew member were able to be evacuated, along with, of course, Unsinkable Sam. The survivors, including Sam, who had been found clinging to a floating plank by a Motor Launch and described as “angry but quite unharmed,” were transferred to HMS Lightning and the same HMS Legion which had also rescued the crew of Cossack. Legion would itself be sunk in 1942, and Lightning in 1943. The life of a ship in wartime was not a safe one.

After the third ship sank under Sam’s paws, it was decided that maybe he shouldn’t be on a ship, so he was transferred first to the offices of the Governor of Gibraltar and then sent back to the United Kingdom, where he saw out the remainder of the war living in a seaman’s home in Belfast called the “Home for Sailors.” I think Sam had earned his place there. Sam died in 1955. A pastel portrait of Sam, which was titled “Oscar, the Bismarck’s Cat” by the artist Georgina Shaw-Baker is on display in the National Maritime Museum in Greenwich.

Of course, as with all war stories, some authorities question whether Oskar/Sam’s biography might be a “sea story,” because for example, there are pictures of two different cats identified as Oskar/Sam. It is my opinion that whether it is true or not, it lends a lighthearted note to the otherwise tragic stories of war, and therefore, I choose to believe it is true.