The Disappearance Of Cyclops 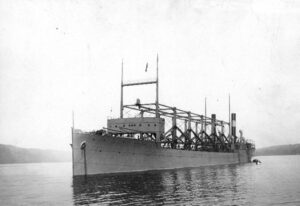 When a ship sinks, we expect to be able to find it, or at least find out where it went down. With radios, making it possible to receive a “May Day” call, we expect to be able to pinpoint the location of the floundering ship. Unfortunately, that isn’t always the case. Sometimes, no matter how hard we search for the ship, plane, and even car, but the search seems to be in vain. I think it is more common to have a search without success when it comes to a ship or even a plane in the ocean. It is so hard to see something that is so far below the surface. Still, it seems like after a century or more, there should be some breakthrough…shouldn’t there.

A 550-foot-long naval ship, USS Cyclops debuted in 1910. The ship was a bit of a jack-of-all-trades, so to speak…at least in it’s early days. It moved coal around the seas, as well as providing aid to refugees. Then, during World War I, USS Cyclops became a naval transporter. In 1918, the Cyclops, with it’s crew of 306 people and 11,000 tons of manganese, sailed from Brazil. The ship made a stop in Barbados and then sailed on toward Baltimore. Somewhere along the way, it disappeared. Strangely, there was no SOS made. It was as if the ocean had swallowed the ship up. Now one knew exactly where to look for it, because it had sailed quite a ways from its last known location. Maybe if there had been a distress call of any kind, they could have had a general location. Without that, they didn’t know if it had gone off course, or how fast it was traveling, so there was no way to be sure. It was thought that the Cyclops may have gone down in

the Puerto Rico Trench. The waters there run very deep, which would have made it very difficult to located the ship in 1918. Still, there was another hazardous area…the Bermuda Triangle, and some people thought that might be to blame.

The US Navy calls the tragedy of Cyclops, “The disappearance of this ship has been one of the most baffling mysteries in the annals of the Navy. All attempts to locate her have proved unsuccessful.” To this day, the original Cyclops has never been found. Many other ships that were lost at sea have been found, many that were lost before Cyclops, but there has been no sign of Cyclops. The mystery of Cyclops might never be solved, and considering the lives lost, that is very sad indeed.