In A Matter Of Seconds 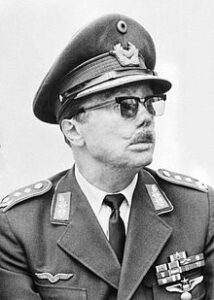 Johannes “Macky” Steinhoff was a fighter ace, flying a Luftwaffe fighter plane, during World War II. He was also a German general, and NATO official. Most of the Luftwaffe pilots did not survive to fly operationally throughout the entire World War II period of 1939 to 1945, but Steinhoff managed to do so. One of the highest-scoring pilots with 176 victories, Steinhoff was one of the first to fly the Messerschmitt Me 262 jet fighter in combat as a member of the Jagdverband 44 squadron led by Adolf Galland. Steinhoff received the Knight’s Cross of the Iron Cross with Oak Leaves and Swords, and later received the Grand Cross of the Order of Merit of the Federal Republic of Germany and several foreign awards including the American Legion of Merit and the French Legion of Honour. Steinhoff also played a role in the Fighter Pilots Conspiracy when several senior air force officers confronted Hermann Göring late in the war.

Steinhoff was born on September 15, 1913 in Bottendorf, Thuringia, the son of an agricultural mill-worker and his traditional housewife. He had two brothers, Bernd and Wolf, and two sisters, Greta and Charlotte. Steinhoff was promoted to Second Lieutenant on 1 April 1936. He married his wife Ursula on April 29, 1939 and they had a son, Wolf and a daughter, Ursula.

One would think that being one of the first pilots to fly a new airplane would be a huge honor, but flying the Messerschmitt Me 262 jet fighter was risky. It wasn’t necessarily that it crashed any more often than any other plane, but the Messerschmitt Me 262 had a rather huge flaw. The fuel tanks were located in front, under, and behind the pilot. That meant that in a crash situation with fuel on board, the pilot was immediately trapped in an inferno. As a member of Jagdverband-44 (JV-44), flying a Messerschmitt Me 262, Steinhoff was permanently disfigured after receiving major burns across most of his body when he crashed after a failed takeoff. It was such a strange situation. His flight leader’s left wheel had blown out causing him to turn and make a sharp left turn, careening into Steinhoff and causing him to run off the runway, at which point, the fuel tanks ruptured. On that fateful day, Steinhoff and the men he was going up with that day were armed with an experimental under wing rocket which among with the cannon ammunition Steinhoff was carrying. It made escape all the more difficult due to the amount ordnance exploding around him. According to ace fighter pilot and member of JV-44 Franz Stigler, “In a matter of seconds, Steinhoff had turned into a human torch.” Steinhoff was left with horrible scarring for the rest of his life and his chances of survival were slim. Against all odds, he pulled through in the end and retired as a four star general in the new German Air Force at age 59.

After his retirement, he joined the West German government’s Rearmament Office as a consultant on military aviation in 1952 and became one of the principal officials tasked with building the German Air Force during the

Cold War. He became the German Military Representative to the NATO Military Committee in 1960, served as Acting Commander Allied Air Forces Central Europe in NATO 1965–1966, as Inspector of the Air Force 1966–1970 and as Chairman of the NATO Military Committee 1971–1974. In retirement, Steinhoff also became a widely read author of books on German military aviation during the Second World War and the experiences of the German people at that time. On February 21, 1994, Steinhoff died in a Bonn hospital from complications arising from a heart attack he suffered the previous December. He was 80, and had lived in nearby Bad Godesberg.