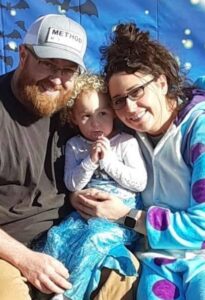 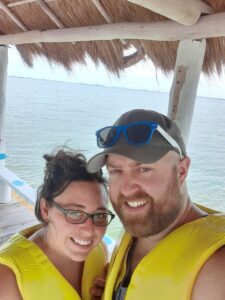 Garrett’s life over the past few years has become more wonderful than he could ever have imagined. In 2016, he married the love of his life, Kayla and they were blessed with a beautiful little daughter named Elliott in 2018. Garrett has always loved children, and now with one of his own, he is so happy. Garrett and Elliott love to do things together, like mowing the lawn, hanging out by the pool, and going down the slide in the bouncy castle pool they rented for her birthday party.

This year, the most exciting thing that happened is that Garrett and Kayla took a trip to Cancun, Mexico to celebrate their birthdays, both of which are in June. They had a wonderful trip. They went golfing and rented a speed boat which Garrett thought was the greatest thing!! They relaxed and enjoyed the sun and the warm waters of the Caribbean, 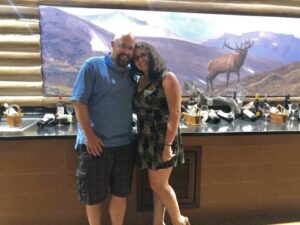 and the many activities at the resort. One of the coolest things was when they found an elk picture at the resort. I don’t know of any elk in Mexico, but I suppose I could be wrong. As a hunter, Garrett found the elk picture a very cool thing. On this trip, they left Elliott first with her grandma, Alena Stevens and then the second half of the trip, her grandma Lynette Smiley took over. Elliott had a wonderful time too. Grandma time is always fun for kids…and it was a great way for Garrett and Kayla to celebrate their birthdays too.

Garrett usually has weekends off, unless they are really busy at EMIT Technologies, where he has worked since shortly after moving to Sheridan. He wants to play lots of golf and do lots of camping this summer. Garrett loves fishing too, so I’m sure some of their camping will be near rivers or lakes so fishing can be part of the fun. I’m 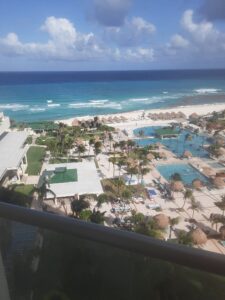 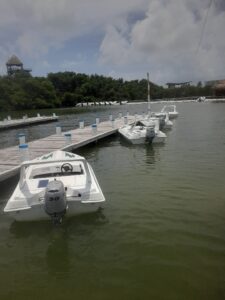 Yes, Garrett’s life took a dramatically wonderful turn back in 2016, because when he married Kayla, his future began. A future that has continued get brighter and brighter. I know that because their love for one another is very strong, they will continue to have wonderful things happen to them, and their life will become more and more wonderful every day. Today is Garrett’s birthday. Happy birthday Garrett!! Have a great day!! We love you!!