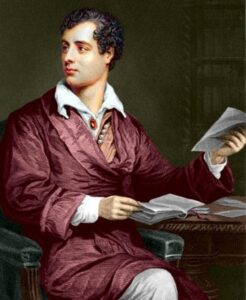 I think most of us have heard of the famous British poet and politician, Lord George Gordon Byron, who took his education at Trinity College in Cambridge…a college that boasts famous alumni, Prince Charles, Sir Isaac Newton, Lord Tennyson, King Edward VII, and King George VI, among many others. Lord Byron was well known for his romantic poetry, but he was also a rebel and would probably be considered a scoundrel.

Trinity College has a strict rule for it’s attendees. No dogs were allowed to be kept in the dormitory, a rule that seriously upset Lord Byron, who had a dog that he really loved and wanted to bring to college with him. Most college campuses do not allow their residents to have pets, other than non-predatory fish, in the on-campus dorms. This is something most college students do not like or agree with, so Lord Byron was not alone in his annoyance. Lord Byron took things to a bit of the extreme, however, when it came to his rebellion, and I really don’t see how he got away with what he did. Lord Byron was known for being an avid animal lover, and when the college refused to allow him to bring his dog, he retaliated by bringing a pet bear in his dormitory!! I have no idea why the school didn’t put a stop to that, but they didn’t. He was even known to take it on walks with a leash!!

I have no idea why he wanted a bear, but if you think this is just a rumor, you are wrong. Lord Byron did indeed keep a pet bear, and not simply because he wanted to or he admired the strength of bears. He had a kind of symbolic or romantic reasoning for doing it. Lord Byron was quite devious, and his reason for having a pet bear at Trinity College was simply one of rebellion. He was known to say, “I have got a new friend, the finest in the world, a tame bear.”

Lord Byron was born in 1788 and throughout his life, he was constantly bucking norms. He had a tumultuous life from a very troubled childhood to being a literary icon by age 20. He was known for his indulgences, affairs, and many pranks which constantly got him in trouble. Nevertheless, even though he was always in the middle of a controversy and known bucking the norms, he also had a soft side for animals. In fact, he was a lifelong animal lover and kept countless dogs and cats throughout his troubled childhood. He even dabbled in exotic animals throughout his life like a monkey, a fox, peacocks, badgers, and a crocodile…and don’t forget the bear. Still, the pet he loved the most was his Newfoundland dog Boatswain? who died in 1808 from rabies. He loved the dog so much he wrote a poem dedicated to him entitled ?”Epitaph to a Dog?” and he even requested to be buried beside Boatswain in his will.

It seems that while Lord Byron was a poet by trade, he could have been a pretty good attorney…if the argument was something he cared about. The dog he had wanted to bring to Trinity College was a bulldog named Smut. As I said, he had a lot of pets. Since the college wouldn’t let him do as he chose, he went looking for loophole. It didn’t take him long to find what he was looking for…that there was no rule against having a tamed pet bear to the campus. So Byron argued with the college officials that he had every legal right to bring the bear. I don’t know if he was shocked, but I would be. Maybe the figured he was bluffing and didn’t really have a pet bear. If that was the case, they were very wrong, because he did, and he willingly produced it. 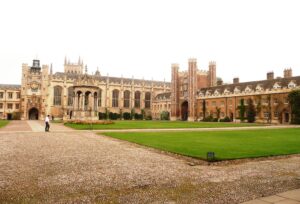 No one really knows where Lord Byron got the bear or what its name was, but he walked the bear on a chain as if it were a dog and would talk to it the way people talk to their pets. It was said that he allegedly wanted to have the bear apply as a student at the college since there were also no rules explicitly saying that bears cannot be students, but this may have been an example of Lord Byron’s sense of humor…or maybe he didn’t want to pay the tuition for a “student” who would not study or have any chance at passing. When he left school, he took the bear with him to London where it was free to roam the estate grounds. It was joined at the estate by Byron’s other pet…a wolf. Wow…just wow!!