The Houdini Of Climbing

My nephew, Isaac Spethman is a very athletic kid. One of his favorite things to do is climb. I suppose you could call him the Houdini of climbing. Houdini was an illusionist, but he was also a stunt performer. I don’t know if Isaac likes illusionist tricks, but he definitely likes stunts. He also love to go with his mom when they are “adventuring.” He loves to forge. I think this kid might be half mountain man. Isaac doesn’t just look around for trinkets he can sell, he melts down pop cans and makes shapes out of them. He has also made knives out of spikes and rebar. I’m sure that one of his favorite shows is probably “Forged In Fire,” which is all about knife making. I have to admit that I like it too. The process is very interesting.

Isaac is a hunter now that he has passed his hunter safety class. He and his siblings have grown up around guns, and their parents have taught them, not only safety, but the value of life human or otherwise. They would never kill anything just to kill. They have too much respect for life to ever consider that to be ok. Isaac’s love of hunting and guns has made knives interesting to him as well, hence the love of forge a knife. Isaac 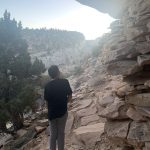 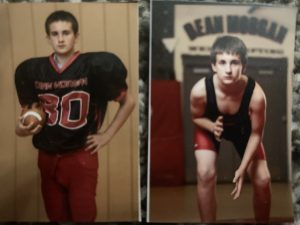 enjoys other sports too, like wrestling and football. He is very good at both. He is not a husky kid, but rather is wiry, and that makes him a good wrestler. He is also a capable runner, which makes him a good football player, but most importantly, he is full of energy. He doesn’t like to just sit around. In fact, slow down…is not a phrase in his vocabulary.

Isaac is the youngest of his sister, Aleesia’s three older brothers. That makes him a couple of things. Being the youngest of the three brothers, he has had to learn to defend himself. His brothers, Xander and Zack are good boys who love their brothers and sister, but there is still that “I’m the boss of you” aspect of their relationship. That makes him both tough, and sometimes, put upon. Being the youngest of the boys, the only one he can be the “boss of” is his little sister, Aleesia. With that, it naturally follows that he is the most ornery to Aleesia, but make no mistake about it, he also watches her like a hawk. I’m sure that Aleesia has mixed feeling about all that, depending on what she needs him to be at the

time. A brother who won’t let you out of his sight can be annoying, until someone decides to pick on you or you get in a jam. Then that brother is a very good thing to have around…as Aleesia well knows. Today is Isaac’s 14th birthday. I can’t believe he is 14. It seems like just yesterday that he was the baby. Happy birthday Isaac!! Have a great day!! We love you!!