The Heroes Of Pearl Harbor 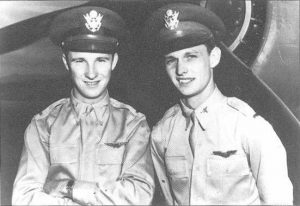 There were heroes on that day, however. The people who worked to save what lives they could, and put out the fires caused by the attack. And there were two heroes I had never heard about. I’m not sure why I hadn’t, but the fact remains that I hadn’t. Kenneth Taylor and George Welch were pilots stationed at Pearl Harbor on that fateful day. Taylor was a second lieutenant in the US Army Air Corps’ 47th Pursuit Squadron. He received his first posting to Wheeler Army Airfield in Honolulu, Hawaii in April 1941. His commanding officer, General Gordon Austin, chose Taylor and another pilot, George Welch, as his flight commanders shortly after they arrived in Hawaii. A week before the Japanese attack on Pearl Harbor, the 47th Pursuit Squadron was temporarily moved to the auxiliary airstrip at Haleiwa Field, located some 11 miles from Wheeler, for gunnery practice…a move that made their response to the attack possible.

Saturday, December 6, 1941, found Taylor and Welch spending the evening at a dance held at the officers’ club at Wheeler Field. After the dance, the two pilots joined an all-night poker game. After that, the account of the story gets a little fuzzy. Some said that the two pilots had finally gone to sleep, and were awoken only around 7:51am, when Japanese fighter planes and dive bombers attacked Wheeler, but others said that the poker game was just wrapping up, and they were contemplating a morning swim when the attack began. Whatever the case may be, Taylor and Welch were stunned to hear low-flying planes, explosions, and machine-gun fire above them. Information was scarce in all the chaos, but they learned that two-thirds of the planes at the main bases of Hickham and Wheeler Fields had been destroyed or damaged so badly that they were unable to fly. The two men rush to Haleiwa Field to get their planes. They had no orders, but Taylor called Haleiwa and 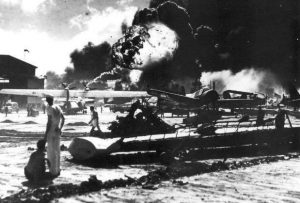 commanded the ground crew to prepare their Curtiss P-40 Tomahawks for takeoff, while Welch ran to get Taylor’s new Buick. The men were still wearing their tuxedo pants from the night before, but that didn’t stop them. The two pilots drove the 11 miles to Haleiwa, reaching speeds of 100 miles per hour along the way.

When they reached the field, Welch and Taylor jumped into their P-40s, which by that time had been fueled but not fully armed. That didn’t stop them. They took off and immediately attracted Japanese fire. Welch and Taylor were facing off virtually alone against some 200 to 300 enemy aircraft. When they ran out of ammunition, they returned to Wheeler to reload. The senior officers ordered the pilots to stay on the ground, but then
the second wave of Japanese raiders flew in, scattering the crowd. Taylor and Welch took off again, in the midst of a swarm of enemy planes. Though Welch’s machine guns were disconnected, he fired his .30-caliber guns, destroying two Japanese planes on the first attack run. On the second, with his plane heavily damaged by gunfire, he shot down two more enemy aircraft. A bullet pierced the canopy of Taylor’s plane, hitting his arm and sending shrapnel into his leg, but he managed to shoot down at least two Japanese planes, and perhaps more. In the end, Taylor was officially credited with two kills, and Welch with four.

Welch and Taylor were among only five Air Force pilots who managed to get their planes off the ground and engage the Japanese that morning. The total loss in aircraft at Pearl Harbor were estimated at 188 planes destroyed and 159 damaged. The Japanese lost just 29 planes. Both men were awarded the Distinguished Service Cross medals, becoming the first to be awarded that distinction in World War II. Welch was nominated for the Medal of Honor, the military’s highest award, but was reportedly denied because his superiors maintained he had taken off without proper authorization. For his injuries, Taylor received the Purple Heart.

After Pearl Harbor, George Welch flew nearly 350 missions in the Pacific Theater during World War II, shooting down 12 more planes and winning many other decorations. After he contracted malaria in 1943, his wartime career came to an end. While in the hospital in Sydney, Australia, he met his wife. After the war, Welch became a test pilot for North American Aviation. There are some claims that he became the first pilot to break the Mach-1 barrier with an unauthorized flight over the California desert in 1947, several weeks before Chuck Yeager’s famous flight. Unfortunately, Welch was killed in 1954 while ejecting from his disintegrating F-100 Super Sabre fighter jet during a test flight.

After Pearl Harbor, Ken Taylor was transferred to the South Pacific, where he flew out of Guadalcanal and was credited with downing another Japanese aircraft. Unfortunately, his combat career was cut short after someone fell on top of him in a trench during an air raid on the base, breaking his leg. He became a commander in the Alaska Air National Guard and retired as a brigadier general after 27 years of active duty. Taylor was awarded the Distinguished Service Cross, the Legion of Merit, the Air Medal, and a number of other decorations. In his post military career, he worked as an insurance underwriter. Taylor died in Tucson, Arizona in 2006, at the age of 86.