A Disaster Waiting To Happen 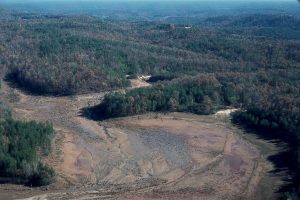 Probably because of the smaller cost of the materials and the ease of transporting material to the site, there are many earthen dams today. I suppose they were properly packed down, and with the addition of vegetation, they seem to hold up well…for the most part. The Toccoa Falls Dam (later known as the Kelly Barnes Dam) was constructed ninety miles north of Atlanta, Georgia. Toccoa is a Cherokee word meaning beautiful. The dam was built across a canyon in 1887, creating a 55-acre lake 180 feet above the Toccoa Creek.

R A Forrest established the Christian and Missionary Alliance College along the creek below the dam in 1911. It is said that he bought the land for the campus from a banker with the only $10 dollars he had to his name, offering God’s word that he would pay the remaining $24,990 of the purchase price later. I guess that the banker either trusted Forrest’s ability to pay the 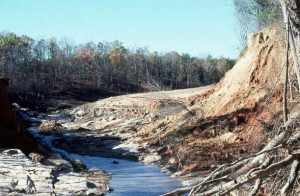 balance, or decided that a Christian college would a good gift to give, whether Forrest was ever able to pay it off or not.

The Christian and Missionary Alliance College had been on the site for 66 years in 1977. On November 5, 1977, a volunteer fireman inspected the dam and found everything in order. A few hours later, in the early morning of November 6, the dam suddenly gave way. With a great roar, water thundered down the canyon and creek, approaching speeds of 120 miles per hour. Still, the residents of the college had no time to evacuate. Within minutes, the entire community was slammed by a wave of water. One woman, a mother of three daughters, managed to hang onto a roof torn from a building. The wave carried her for thousands of feet. She survived, but her three daughters, were among the 39 people who lost their lives in the flood. 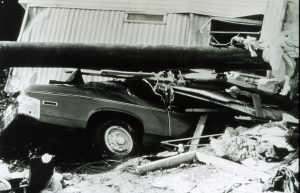 The investigation that followed, cited several possible or probable causes for the disaster. The failure of the dam’s slope may have contributed to weakness in the structure, particularly in the heavy rain of the previous four days. The rain swelled Barnes Lake, which normally held 17,859,600 cubic feet of water, to an estimated 27,442,800 cubic feet of water. When the low-level spillway collapsed, it exacerbated the problem. A 1973 photo showed a 12 foot high, 30 foot wide slide had occurred on the downstream face of the dam, which may have also contributed or foreshadowed the dam failure. Basically, the dam was in poor condition and the design was poor and outdated. It was a disaster waiting to happen.