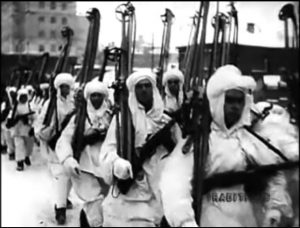 As a part of his planned world takeover, Hitler had sent his forces to invade the Soviet Union in June 1941. Early on it had become one relentless push inside Russian territory, but the Nazis experienced their first setback in August, when the Soviet Army’s tanks drove the Germans back from the Yelnya salient. A shocked Adolf Hitler told General Bock at the time, “Had I known they had as many tanks as that, I’d have thought twice before invading.” Personally, I doubt that it would have made any difference. Hitler did not particularly care about the lives of his men, just that they perform as they were ordered. For the men, there was no turning back because Hitler would not be moved. Hitler firmly believed that he was destined and well able to succeed in dominating the Soviet Union and capturing Moscow, where others had failed.

So, on October 2, 1941, the Germans began their surge toward Moscow, led by the 1st Army Group under the General Fedor von Bock. The Germans and Hitler thought they could come in and mow the people down with no resistance. Then they thought they could take their resources from the people to sustain them through the winter months, while they continued to plunder the country. The Russian peasants had different ideas, however. 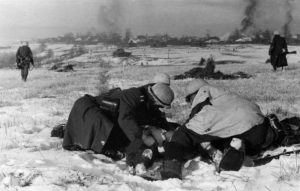 As the Germans approached, the peasants in their path employed a “scorched earth” policy. I’m not a veteran or anything, so somehow I hadn’t heard of this strategy. The idea is to destroy anything and everything that could be useful to the enemy.

This strategy could prove especially useful for the Soviet Union because of the harsh Russian winter. The Russians remembered Napoleon and the fateful winter he and his men spent in the frigid Russian winter. The peasants began destroying everything as they fled their villages, fields, and farms. Harvested crops were burned, livestock were driven away, and buildings were blown up, leaving nothing of value behind to support exhausted troops. Hitler’s army invaded Russia to find nothing but ruins. On top of the lack of shelter and food, winter was upon them, and they were in trouble.

Hitler was a stubborn cuss, and although some German generals had warned him against launching Operation Typhoon as the harsh Russian winter was just beginning, he would not be moved. The generals remembered the fate of Napoleon, who got stuck in horrendous conditions. Over the course of that winter, Napoleon lost 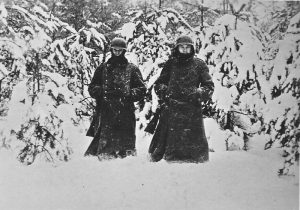 serious numbers of men and horses. Still, some people urged him on. This encouragement, coupled with the fact that the German army had taken the city of Kiev in late September, caused Hitler to declare, “The enemy is broken and will never be in a position to rise again.” So for 10 days, starting October 2, the 1st Army Group drove east, drawing closer to the Soviet capital each day, but by the time the operation was over on January 7, 1942, the German army had not reached Moscow. German casualties amounted to 460,000 men, many of whom were frozen to death due to the lack of proper clothing to handle the harsh Russian winters. It was a catastrophic loss to the the German army.