The Worst Fate Of All 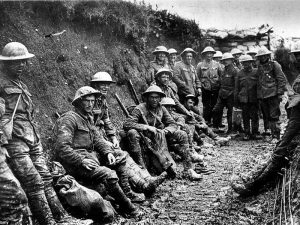 World War I brought a new kind of fighting…trench warfare. It actually started on September 15, 1914, when a battle dragged on far longer that anyone ever expected. The Battle of the Marne was expected to be over quickly, but the soldiers had other ideas. Allied troops halted the steady German push through Belgium and France that had proceeded over the first month of World War I, but neither side was willing to give up. Allied and German forces begin digging the first trenches on the Western Front. They were in this for the long haul. It was the beginning of trench warfare…a tactic that went on until 1918.

Trench warfare was a good tactic to use for the most part, because it provided some protection from the enemy forces on the ground. The air war during World War I was much different that the air war of World War II. There were no heavy bombers, and while 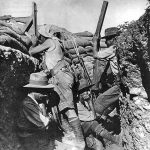 there were fighter planes, most of the war was fought on the ground…in the trenches. Soldier had some place to hide from the bullets that were flying by them at lightning speed. The men often used periscopes to safely see over the sides of the trenches. There is no completely safe way to fight hand to hand combat, but the trenches were often the best protection available. Still, while the trenches did provide a measure of protection, they had their dangers too. First, the trenches had to be dug, and the digging might easily be done with the enemy coming up on you fast, or worse yet, already there. The trenches were dug by the men, in ground that was often hard and rocky, but the job had to be done, and then the battle still had to be fought, no matter how weary the soldiers were…no matter how much they needed sleep, in a warm bed.

Sometimes, the the worst danger would become a reality, and it often had nothing to do with the enemy. 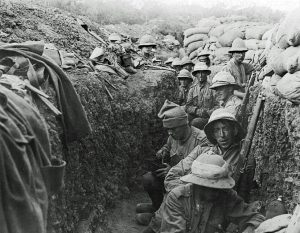