The Last Prisoner In Spandau Prison

Spandau Prison was located on Wilhelmstraße in the borough of Spandau in western Berlin. It was constructed in 1876. It initially served as a military detention center. From 1919 it was also used for civilian inmates. It held up to 600 inmates at that time.

Rudolf Walter Richard Heß was born on April 26, 1894 in Ibrahimieh, a suburb of Alexandria, Egypt, which was at that time under British occupation, even though it was a part of the Ottoman Empire. Heß was born into a wealthy German family. His parents were Johann Fritz Heß and Klara Munch Heß. He was a German politician and a leading member of the Nazi Party in Nazi Germany. Heß was appointed Deputy Führer to Adolf Hitler in 1933, and served in that position until 1941, when he flew solo to Scotland in an attempt to negotiate peace with the United Kingdom during World War II. He was taken prisoner and eventually convicted of crimes against peace, serving a life sentence. I’m not sure what he thought he was going to accomplish, going in there by himself, or if he later thought he could get back in Hitler’s “good graces,” but the attempt ended his freedom for the rest of his life.

Heß joined the Nazi Party on July 1, 1920 and was at Hitler’s side on November 8, 1923 for the Beer Hall Putsch, a failed Nazi attempt to seize control of the government of Bavaria. While serving time in jail for this attempted coup, he assisted Hitler with his book, “Mein Kampf,” which became a foundation of the political platform of the Nazi Party. Hitler decreed on the outbreak of war on September 1, 1939 that Hermann Göring was his official successor, and named Heß as next in line. In addition to appearing on Hitler’s behalf at speaking engagements and rallies, Heß signed into law much of the government’s legislation, including the Nuremberg Laws of 1935, which stripped the Jews of Germany of their rights in the lead-up to the Holocaust.

When Heß made his solo flight to Scotland on May 10, 1941, it would appear he was willingly committing treason against his government, but that did not impress the British government, who probably thought it was all a ploy…and maybe it was. Most of us will never know. Heß was arrested and finished out the war in a British prison camp. When the war ended, he was returned to Germany to stand trial in the Nuremberg Trials of major war-criminals in 1946. During much of the trial, he claimed to be suffering from amnesia, but he later admitted this was a ruse. The Court convicted him of crimes against peace and of conspiracy with other German leaders to commit crimes. He was to served a life sentence in Spandau Prison…the Soviet Union blocked repeated attempts by family members and prominent politicians to win his early release.

During the time Heß was at Spandau Prison, there were only seven prisoners there. Konstantin von Neurath, Erich Raeder, Karl Dönitz, Walther Funk, Albert Speer, Baldur von Schirach, and Heß. The men all arrived at Spandau from Nuremberg on July 18, 1947. Of the seven, three were released after serving their full sentences, while three others, including Raeder and Funk, who were given life sentences, were released earlier due to ill health. Between 1966 and 1987, Rudolf Hess was the only inmate in the prison and his only companion was the warden, Eugene K Bird, who became a close friend. Bird wrote a book about Hess’s imprisonment titled The Loneliest Man in the World. In his book he claims to have been told what Heß’s intentions were during his ill-fated attempt at peace talks in 1941. 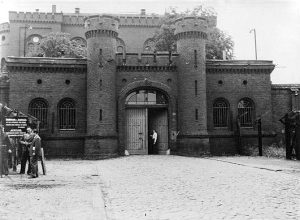 I can’t imagine what it must have been like to be the only prisoner in a prison that once held 600 men. My guess is that it was lonely for the warden too, although he could leave when he wanted to, and Heß could not. The men did develop a friendship, but that cannon really change the feel of emptiness that persisted over the prison for 21 long years of virtual emptiness. While Heß lived a long life, the isolation finally got the better of him, and he hanged himself on August 17, 1987. He was 93 years old. Following his death, the prison was demolished, because the authorities did not want it to become a neo-Nazi shrine. The site was later rebuilt as a shopping center for the British forces stationed in Germany.

2 Responses to The Last Prisoner In Spandau Prison