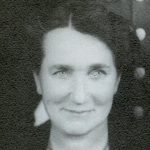 I can’t imagine having my first child on my own birthday, but it does happen, and did happen for my grandmother, Anna Schumacher Spencer and her first born, Laura Spencer Fredrick. Then, to top it off, it would be ten years before Grandma’s second child, my Uncle Bill was born. No one that I have talked to is sure why there would be ten years in between those first two children. After my Uncle Bill was born in 1922, my dad, Allen would follow in 1924 (15 months after Uncle Bill), and Aunt Ruth in 1925 (18½ months after my dad). Nevertheless, Aunt Laura was an only child for ten years, and during that time, she and her mom were very close. They did everything together. Of course in the early years, that made sense, since Aunt Laura was a little girl who didn’t go to school or anything, but even later, there were wonderful trips with family and friends into town and shopping.

During those early years, Grandpa Allen Spencer, worked a number of jobs. At one time, he worked in the lumber business, taking his little family to the camp in the middle of the woods. I’m sure it was rather a lonely existence for Grandma, but she had her little daughter to keep her company, and that helped a lot. For long months they didn’t really go anywhere much, but there might have been a few other wives living in the camps. Still, mostly it was Grandma and Aunt Laura. I can imagine the games they played and the walks they took. There wouldn’t have been much else to do, so mother and daughter would have bonded over the long hours spent together. It was always so obvious to me just how proud Grandma was of her well-behaved little girl. 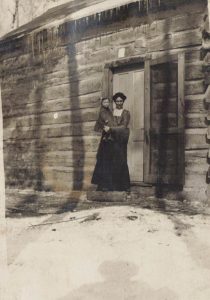 Later, there were trips taken to see family. Grandma’s little family of three was excited to be going and the other family and friends were happy to see them. Aunt Laura always seemed to stay close to Grandma, but maybe that was just for the pictures. Aunt Laura was very well behaved, a credit to her mother’s upbringing. She was really quite grown up for her age, and in fact, when Uncle Bill arrived, she was his nanny at just ten years old. Grandma was running a hotel by then, and Grandpa had to work too, so Aunt Laura needed to help, and now she had a job too. I’m sure it made her feel grown up. She was very close to her brother, just like her mother had been with her. Like mother, like daughter. Today is the shared birthday of my grandmother and Aunt Laura. Both are in Heaven now, and we love and miss them very much.