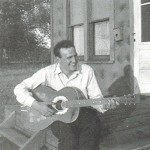 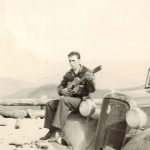 My grandson, Caalab Royce; his dad, Travis; as well as my Dad, Allen Spencer and Uncle Bill Spencer; brother-in-law, Chris Hadlock; and nephew, Ryan Hadlock all play the guitar. There may be others in the family too, but they haven’t made it public knowledge. Any time I come across a some information, on guitars or their makers, I am interested, because of these people.

Adolph Rickenbacker was born on April 1, 1886 in Basel, Switzerland as Adolph Rickenbacher. Following the death of his parents, he immigrated to the United States in 1891 with relatives. He settled in Columbus Ohio and later moved to southern California. Rickenbacher was a distant cousin to America’s top Flying Ace Eddie Rickenbacker. Rickenbacher decided that the name association would be helpful to him in his chosen career, so he Anglicized both his own name and that of his company, to Rickenbacker Manufacturing Company. His company made metal bodies for the National String Instrument Corporation. These metal bodies were used to make electric guitars. Through this connection, he met George Beauchamp and Paul Barth, and in 1931 they founded the Ro-Pat-In Company.

The three men produced the first cast aluminum versions of the lap steel guitar in 1932. In 1934, they renamed their company to the Electro String Instrument Corporation. Still, this was not to be a long term business. Music instruments tend to evolve and the resulting instrument looks little like the original. Production 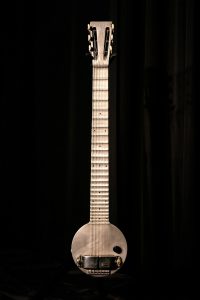 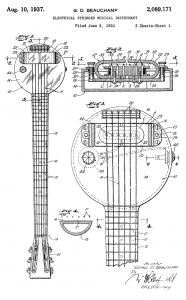 ceased in 1939, after approximately 2,700 Frying Pan guitars had been produced. Rickenbacker, who was not convinced of the guitar business’s potential, continued manufacturing until 1953. Then he sold his company to Francis Cary Hall, a forerunner of the Southern California electric guitar boom. I wonder what might have been if the Electro String Instrument Corporation had continued on. While the signature “Frying Pan Guitar” might not have held it’s popularity, many other looks have followed.

Nevertheless, the “Frying Pan Guitar” had been a wonderful career for Rickenbacker. When he finally sold the business, Adolph Rickenbacker was 67 years old. He went on to live a over 20 more years before he died from cancer in Orange County, California on March 21, 1976 at the age of 89.