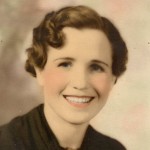 When we think of eavesdropping, we think of trying to listen in on the conversations of people around us for the purpose of malice. However, not all eavesdropping is like that. I like to sit quietly in a room listening to the conversations going on around me, because you can learn so much about what other people think. My Great Aunt Bertha Schumacher Hallgren, who wrote a wonderful journal about her family’s lives and the world they lived in at that time. Bertha quoted Charles Lamb, who in 1890 said, “I love to lose myself in other men’s minds.” I feel that way about eavesdropping.

If we are honest with ourselves, we all listen to the conversations going on around us. I can’t tell you how many times several tables in a restaurant end up in a conversation, because someone at one table said something that struck a chord with someone at another table. It is impossible for a person with good hearing not to hear the conversations going on around you, and I don’t think of it as being snoopy. Our ears were designed to listen to things going on 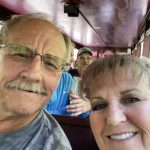 around us. Maybe it was originally so that we could hear impending disaster, such as a growling bear, a tornado, a rushing flash flood, or screeching car tires, still our ears can’t avoid hearing the child saying something hilariously funny to its mother, the couple talking about something they don’t understand, or just the family saying something that you passionately agree with. We hear it, and eventually, our mouth cannot help itself, and we find ourselves engaging in the conversation we were just eavesdropping on.

Yes, sometimes people get annoyed when we try to engage in their conversation, but often, they do not get upset. Today, while my husband, Bob and I were riding the 1880 Train in the Black Hills, a trip we take every year when we go to the Black Hills, overheard the couple behind us talking about the many cars that stop and wave and take pictures of the train at every crossing. As I listened to their incredulity, I could stand it no longer. I turned and told them that people loved the train so much that they followed it from stop to stop to 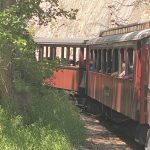 wave and take pictures. I was not being rude, just telling them about the love people have for the 1880 Train. They loved it. They asked if we lived in the area, and when we said that we just came every year, the conversation was on. We talked about the Harney Fire Lookout Tower on what is now Black Elk Peak (Formally Harney Peak), and that Bob and I have hiked it 14 times. Then I showed them a picture of us at the top. After they looked, the people behind them wanted to see too. I think they might have been traveling together, but I’m not sure. They might have been eavesdropping too. It was a great conversation, and no one was upset by the eavesdropping, in fact, they and we enjoyed the resulting conversation very much.