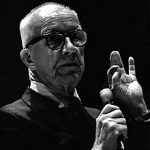 These days, we all expect the latest new car to look different, to say the least, and strange, in some cases, but that is not really what we might have expected in the 1930s. Nevertheless, in 1933, they people might have been a little bit surprised to see the car designed by Richard Buckminster Fuller, an American architect, systems theorist, author, designer, inventor, and futurist. Fuller was born on July 12, 1895, in Milton, Massachusetts, the son of Richard Buckminster Fuller and Caroline Wolcott Andrews. The unusual middle name, Buckminster, was an ancestral family name. Like many kids, he tried numerous variations of his name. He used to sign his name differently each year in the guest register of his family summer vacation home at Bear Island, Maine. He finally settled on R. Buckminster Fuller. Not what I would have expected, but to each his own.

Fuller married Ann Hewitt in 1917, and they would have two daughters, Alexandra born in 1918, and Allegra, born in 1927. Following the death of his daughter Alexandria in 1922 of complications from polio and spinal meningitis just before her fourth birthday, Fuller suffered with depression, even contemplating suicide. Then, he made a decision to live out his life as “an experiment to find what a single individual can contribute to changing the world and benefiting all humanity.”

In 1927, Fuller sketched the Dymaxion car under the name “4D transport.” The car was most unusual in its appearance. Part aircraft, part automobile, it actually had wings that inflated. Fuller asked a friend, sculptor, Isamu Noguchi to make more sketches of the car in 1932. The final design was an elongated teardrop body, with a rear third wheel that lifted off the ground and a tail fin. Fuller set up production of the Dymaxion car in a former Locomobile factory in Bridgeport in March 1933. The first model rolled out of the Bridgeport factory on July 12, 1933…Fuller’s 38th birthday. It had a steel chassis and a body made of ash wood, covered with an aluminum skin and topped with a painted canvas roof. It was designed to be able to reach a speed of 120 miles per hour and average 28 miles to the gallon of gasoline. The first model was sold to Gulf Oil, and dubbed the Dymaxion car. It went on display at the Century of Progress exposition in Chicago. Unfortunately, that October the professional driver Francis Turner was killed after the Dymaxion car turned over during a demonstration. The Dymaxion was cleared of responsibility in the ensuing investigation, but investors became scarce, despite the enthusiasm of the press and of celebrities such as the novelist H.G. Wells and the painter Diego Rivera.

The Dymaxion, along with the Nazi-built KdF-wagen (the forerunner of the Volkswagen Beetle), was one of several futuristic, rear-engined cars developed during the 1930s. Because of the tragic death of Francis Turner,

it was never mass-produced. Still, the Dymaxion helped lead to public acceptance of new streamlined passenger cars, such as the 1936 Lincoln Zephyr. The only surviving Dymaxion was featured in an exhibit dedicated to Fuller’s work at the Whitney Museum of American Art in New York City in 2008. The New York Times, in an article about the exhibit recalled Fuller’s own impressions of the Dymaxion, “‘I knew everyone would call it a car,’ he told the literary critic Hugh Kenner in the 1960s; instead, it was actually ‘the land-taxiing phase of a wingless, twin orientable jet stilts flying device.'” Interesting analogy…don’t you think?