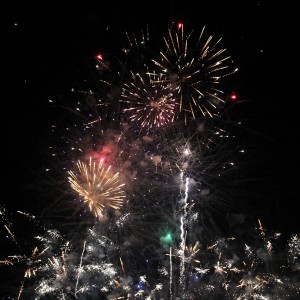 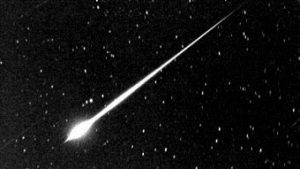 It was in the middle of World War I, on the 4th of July, 1917. The citizens of Colby, Wisconsin were busy celebrating Independence Day. Colby was originally famous for the making of Colby cheese, but it was about to be famous for something else entirely. Around 6:30, the people were setting of fireworks and everyone was having a great time, when suddenly, there was a louder-than-it-should-have-been explosion. The people were startled and began to speculate as to the origin. Some thought it was dynamite set off by some over-zealous celebrators. Then, they dismissed that thought, and some of the townspeople were concerned that when the went outside, they might see a Zeppelin dropping German bombs on the little town. In the end it turned out to be something form much further away…outer space to be exact.

The streak through the sky could have been missed because of the fireworks, but the explosion was another thing entirely. The meteorite hit just west of the Zion Lutheran Church, which is still there on the corner of West Jefferson Street and North 2nd Street in Colby, Wisconsin. When the townspeople located it easily, due to the smoke trail in the sky. They found that it had broken into two pieces, with the smaller piece landing just a short distance from the church, imbedded to a depth of one foot. It weighed about 75 pounds, and was said the be intensely cold, forming frost on it when it was uncovered. The larger piece landed in Joseph Jordan’s field, imbedding itself to a depth of five feet. The depth made it difficult to dig up, so it was not unearthed until the next morning when Professor Williams secured it for a school exhibit. That piece weighed about 300 pounds, and was apparently not as cold, probably due to the time spent in the ground.

It was said that another piece had landed in Cornell, Wisconsin, which is about 60 miles away from Colby. Amazingly, none of the other small towns in the area were hit. The principal of the Colby High School assumed, 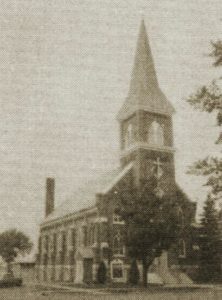 correctly as it turns out that there were likely to be other fragments too. He did some digging in the area, and is said to have found a sizeable collection of fragments. Of course, that makes sense, because as a meteor streaks through our atmosphere, the intense heat, impacting the intense cold usually causes them to break up long before they impact the Earth’s surface. Still, every so often, a particularly sturdy meteor slips through without being totally obliterated, and then we have a strike, such as the one in Colby, Wisconsin in 1917.

According to the Wisconsin Geological and Natural History Survey, there have been 13 documented meteorite strikes in Wisconsin since 1860. The latest one was in April 2010. Often, the way that meteorites are discovered is that someone finds a rare mineral rock, and when checked, the chemical makeup of the stone indicates that it may have originated in outer space. Of course, that doesn’t document when it happened, or if it was actually part of a documented strike. We always have been and probably always will be fascinated by the extraterrestrial.

2 Responses to Definitely Not Fireworks