My Aunt Jeanette Byer has always been a sweet person, who was easy to get along with, and yet she was also a hard working, and really tough lady when she needed to be. For most of the years of my memory, she and my Uncle Larry lived on a piece of land east of Casper where they raised their two children, Larry and Tina. They really loved their place out in the country, but as life sometimes shows us, change happens. The job at the Texaco Refinery in Casper, Wyoming was closing, and Uncle Larry was offered a transfer to Louisiana. So they packed up their home and moved to the New Orleans area. They split up their property between their two kids, as settled down in their new home, and Uncle Larry to his new job. There were also trips here and there, seeing all the sights in their new home. Louisiana is, of course, a beautiful state. 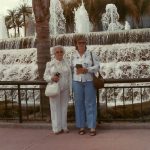 Louisiana was a big change for to small city people from the much colder state of Wyoming. One big change is the difference in the level of humidity, which is quite high in Louisiana. I’m sure it was a bit of a transition for them. I know that when my parents visited them there, my mom, Collene Spencer noticed a feeling of difficulty breathing. It wasn’t serious, just that the added humidity made the air feel heavy, and difficult to breathe in. Aunt Jeanette told her that is was something you get used to, and I’m sure it is, and the time spent there for a visit would not give you enough time to do so. Aunt Jeanette also told her that the humidity made you feel wet right after you dried off after showering. While the warmer weather would be nice, I don’t know if the humidity would be a good trade off to get it. 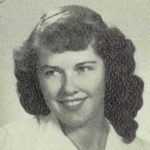 I think that Aunt Jeanette and Uncle Larry felt the same way, because when he retired, they headed back to good ole’ Wyoming. Of course, their children and grandchildren are still in the Casper, Wyoming area, so that gave an incentive to move back. We, the family, were all glad they were back too. Louisiana is really far from Wyoming, and we missed them. They moved their things back to Casper over two summers, and on the second trip, they stayed. Uncle Larry passed away, on December 22, 2011, but we still have Aunt Jeanette with us. She is in good health and doing well.  I even came across her high school graduation picture as I was contemplating my story. Wasn’t she beautiful!! Today is Aunt Jeanette’s 84th birthday. Happy birthday Aunt Jeanette!! Have a great day!! We love you!!