The Rest Of The Story

After a number of years of wondering what happened after the writing of my Aunt Bertha Schumacher Hallgren’s journals, or my reading of them…I have wondered about so many things. Bertha’s journal was so detailed and so interesting, but it left me feeling a little bit “at loose ends” about the lives of my aunt, and the Carl and Albertine Schumacher family, of which I am a part. I knew some things of course, like the fact that my Aunt Bertha had breast cancer, and that Aunt Mina had rheumatoid arthritis, as did her mom, my great grandma, Albertine Schumacher, and her siblings, my grandma, Anna Spencer and my Uncle Fred Schumacher. It left me wondering why it is that so often our lives come down to what illness we might have had? And then Aunt Bertha answers the question I had, when she said, “Only deep impressions are held in the conscious mind…ever present, while the sub-conscious may retain all experiences.” I suppose that our lives are marked by events, but surely there must be things that are more important that what disease a person had. Nevertheless, Aunt Bertha was “in my opinion” and that of my family, an excellent writer. She told the human side of history, and not just the historical events. Without the human side, history can be very boring, but you put in the hopes, 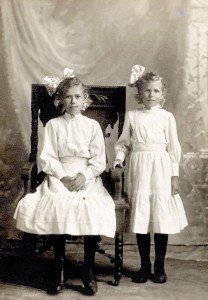 dreams, feelings, illnesses, and everyday lives of the people involved in the history being discussed. That is when history comes to life.

My Aunt Bertha and her sister, my Aunt Elsa took care of their parents who were ill, and in doing so, they gave up the chance to have a family of their own. They “adopted” their sister, Mina’s children as a replacement for children of their own. They both assumed that marriage was also one of those things they would have to give up, but in their latter years, both were given back that part of their lives, when they met and married their husbands, Arthur (Bertha) Hallgren and Frank (Elsa) Lawrence. Unfortunately, neither marriage lasted long, with Elsa’s ending in Frank’s death after 6 years, and Bertha’s ending in Arthur’s death after 2½ years.

Aunt Bertha fretted some when Elsa got married, not because Elsa was getting married. Bertha was happy for her, but she and Elsa had lived together all their lives to that point…42 years in all. Bertha said that it felt like a divorce…dividing up the household, “you take this and I’ll take that.” Bertha had never lived alone before. I’m sure she felt lonely…even before Elsa left. Then, after Elsa returned home when her husband passed away, when Bertha was ill, she worried about how Elsa would do when she was gone. Bertha was really very protective of her little sister, who had never lived alone. In the end, Elsa would live 17 years beyond Bertha’s life. She was ok, but I know she 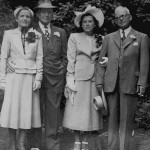 I knew that my great grandparents were Christians, and had raised their children as Christians, and that teaching came down through the generations. Nevertheless, I was very moved by the way my aunt expressed her faith and trust in God. She knew that her life would not have been nearly as blessed as it was, if it had been lived without God in her life. I don’t know why it seems new to me, but I guess it’s because people don’t often talk about their faith, here she was, telling about the deep relationship with God. It was very moving, and sweet. Bertha was a woman who had been single for all but 2½ years of her life. She learned to depend on God…to trust Him. She loved her Lord, and I love that.