History is told by the survivors

While listening to an audible book about World War II, called “Flak,” I heard one of the men being interviewed by the author for the book say, “History is told by the survivors.” It occurred to me that in most cases, at least in eras gone by, that was the truth. In order to know what really happened, there had to be a survivor. Even today, in an era of DNA, forensic science, black boxes, and phone video, there are events that cannot be definitively explained, and causes that remain a mystery.

In World War II, survival was one of the main necessities to properly make an account of events. One might be able to look at pictures an know that the attack was bad, but in order to understand what it meant to fly through flak, someone had to really explain what the flak looked like up close, and tell us how hot it was when it got close enough to put a hole in the fuselage of the plane. We can imagine the fear the soldiers of World War II felt, but only because someone has “painted” a picture of just how bad it was to be pinned down in a foxhole with bombs raining down all around you, and bullets flying past if you tried to get out and run. No amount of 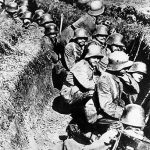 modern technology can explain how a soldier might have felt upon looking at his helmet to find a hole in it where shrapnel pierced it, and the soldier received only a small scratch. All of the “facts” that can be gleaned from the modern technology we have simply can’t tell us about how people felt.

My dad, Allen Spencer was a top turret gunner in a B-17G bomber stationed in Great Ashfield. He told once about the ball turret gunner being shot up, and the desperate and futile effort to save his life. It was something Dad would never forget. The bombers that crashed taking all hands down with them, left no witnesses to tell if it was shot down or had engine trouble. If the plane could be found today, they might be able to guess at the cause of the crash, but it still might not be definitive. As to the soldiers who went missing in action, it was not uncommon for their body never to be found, and so no one could document their death, unless a buddy survived. All of the war stories we have today from World War II were told by the men, and women too, who survived. We know from the ones who witnessed the planes being shot down, blown up, or crashing with engine trouble. On the battlefield, the only witnesses were the other 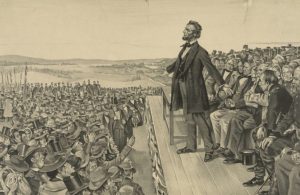 soldiers in the area, because the civilians had run far from the area.

Even the non-war events of history had to have a “survivor” to tell about the event. It may not have been a violent event, but the Gettysburg Address would never have been known to anyone, if it had been spoken aloud in President Lincoln’s study with no one present. The speech might have been found later, but the depth of it’s meaning might have been completely lost had one witness not been so deeply moved by the speech. I wonder how much history was lost because no one was there to see and then survive to tell about it. It’s something to think about.