We always think of the wars between the Indians and the White Man being disputes between the two parties over land, and often they were, but sometimes it is something else altogether, and sometimes it is simply ad devastatingly, a mistake. As with many Indians of the early years of our country, not much was known about Chief Cochise’s early life, but he was hailed as one of the great leaders of the Apache Indians. He took them into many battles between his people and the people of southern Arizona and northern Mexico, who he felt were pushing his people off of their lands. Like many other Chiricahua Apache, Cochise resented the encroachment of Mexican and American settlers on their traditional lands. They felt like they had been pushed back and they were tired of it. Cochise began to lead many raids on the settlers living on both sides of the border. The raids caused Mexicans and Americans alike start calling for military aid.

While those raids resulted in deaths and retribution, there was a war that was started for a completely different reason…a misunderstanding. In October 1860, a band of Apache attacked the ranch of John Ward, who was an Irish-American. The Apache kidnapped Ward’s adopted son, Felix Telles. Ward was not home at the time, and while he had no confirmation, he was convinced that Cochise was the leader of the raid. Ward demanded that the US Army go out to rescue his son and bring Cochise to justice. Of course, the Army mobilized immediately, under the command of Lieutenant George Bascom.

Cochise had no idea that they were in any danger, when they received Bascom’s invitation to join him for a night of entertainment at a nearby stage station. I suppose that is was a peaceful way to arrest the warriors, 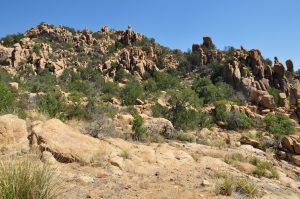 but it seems so unscrupulous now. Still, I guess no one died that night. When the Apache arrived, Bascom’s soldiers arrested them. Cochise told Bascom that he was innocent of the kidnapping of Felix Telles, but the lieutenant refused to believe him. Bascom decided that Cochise would be kept in confinement until the boy was returned, thinking that his warriors would relent and give up the boy to get their chief back, but Cochise had other ideas. Cochise determined that he would not tolerate being imprisoned unjustly. He used his knife to cut his way out of the tent where he was being held and escaped. They did not recapture Cochise, and the boy was not returned.

The raids continued and increased in severity over the next decade. Cochise and his warriors also fought occasional skirmishes with soldiers. The unrest started a panic among the settlers, and they began to abandon their homes. The Apache raids took hundreds of lives and caused hundreds of thousands of dollars in property damages. As time went on the US government was desperate for peace by 1872, so finally the government offered Cochise and his people a huge reservation in the southeastern corner of Arizona Territory, in exchange for the cessation of the hostilities. Cochise agreed, saying, “The white man and the Indian are to drink of the same water, eat of the same bread, and be at peace.” Cochise knew that he needed to help his people transition into a day of peace. Unfortunately, Cochise did not get to enjoy his hard-won peace for very long. He became seriously ill in 1874. It is believed that he quite possibly had stomach cancer. Cochise died on June 8, 1874. That night his warriors painted his body yellow, black, and vermilion, and took him deep into the Dragoon Mountains. They lowered his body and weapons into a rocky crevice, the exact location of which 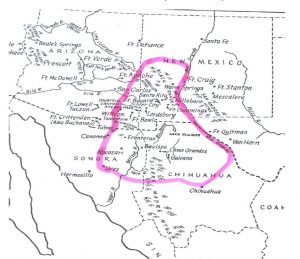 remains unknown. I don’t know if that is a traditional burial for a chief, or if Cochise was considered special, but to this day that section of the Dragoon Mountains is known as Cochise’s Stronghold.

The war had lasted from 1860 to 1872, and was truly all about the kidnapping of Felix Telles, but about a decade after Cochise died, Felix Telles actually resurfaced. He was alike and well, and was actually an Apache-speaking scout for the US Army. How could they have not known who he was? Nevertheless, they didn’t. He reported that a group of Western Apache, not Cochise, had kidnapped him. That was such a devastating revelation. To know that so many people lost their lives because of a misunderstanding.