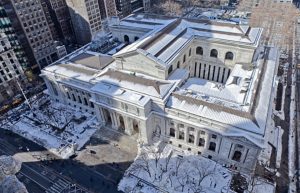 As New York City grew is size, passing Paris in population and quickly catching up to London by the late 19th century too, it still remained the only city of such size to lack a public library large enough to serve it’s many citizens. It didn’t look like something that was going to change in the near future, but when former New York Governor Samuel J. Tilden died in 1886, he left $2.4 million to the city to “establish and maintain a free library and reading room in the city of New York.”

While it was a wonderful gift, it remain unspent until May 23, 1895, when New York’s two largest libraries…the Astor and Lenox libraries…agreed to combine with the Tilden Trust to form a new entity that would be known as The New York Public Library. I’m not sure why the delay, other than maybe the loss of some of the smaller 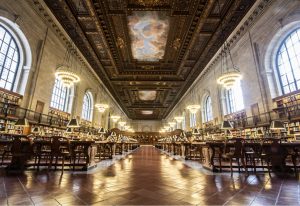 “neighborhood” libraries. Whatever the case may be, the work finally began on the New York Public Library, and the final structure was spectacular.

The main branch of the library was dedicated in midtown Manhattan sixteen years later to the day. The library is the largest marble structure ever constructed in the United States, is dedicated in New York City. I don’t know much about construction, but it seems to me that marble construction might be harder. The building fills a two-block section of Fifth Avenue between 40th and 42nd Streets, the monumental structure took 14 years to complete at a cost of $9 million. Nevertheless, the day after its dedication, the library opened its doors to the public, and some 40,000 citizens passed through to make use of a collection that already consisted of more than a million books. The people of New York City were excited to have such a wonderful collection of 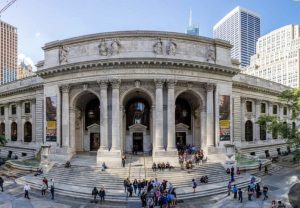 knowledge at their disposal…and for free. In a ceremony presided over by President William Howard Taft, the New York Public Library was dedicated on May 23, 1911. Gifts continues to roll in over the next few decades, and thanks in large part to a $5.2 million gift from steel baron Andrew Carnegie, a system of branch libraries opened throughout New York City, basically giving back some of the neighborhood library feel again. Today, the New York Public Library is visited and used annually by more than 10 million people, and there are currently well over two million cardholders, more than for any other library system in the nation.

One Response to The New York Public Library