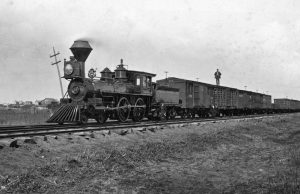 Flood waters carry with them more damage than people imagine. Water just doesn’t seem like the force it can become. That was exactly what had happened in May of 1878. The flood waters came rushing down the creek overnight, and the force of the water had wiped out a bridge at Box Elder, Montana. The section foreman discovered the missing bridge and rushed to secure a red light for the purpose of signaling the Kansas Pacific freight train. He knew the train was due any minute. Before he could avoid the approaching disaster, the train thundered down upon the chasm left by the missing bridge, and into the torrent of wild waters below.

The accident occurred about 12 o’clock that Tuesday night, three employees lost their lives, and a whole freight train was totaled. John Bacon, of Denver, who was the engineer; his fireman, Frank Sellvin, and another employee named John Piatt, were in the engine, and unable to escape. The whole train had eighteen cars. The fatal blow came when the car that was loaded with railroad iron, came to rest on top of the wreck, burying the men piled upon the wreck and buried the men. They might as well have been buried beneath a mountain. The crews knew it would be several days before they would be able to remove the bodies from the wreckage. Nevertheless, given the way the iron car fell on the engine, it was certain that the three men died instantaneously…or nearly so. 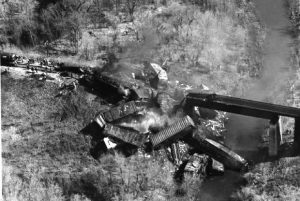 In a bizarre twist, the body of Frank Sellvin turned up, not under the wreckage, but a mile and a half from where that accident occurred. It appeared that he jumped from the engine as it fell. While trying to save himself, he was instead carried by the raging torrent out of the reach of the wreck, but not out of the clutches of the killer flood waters. By midnight the bodies of the other two men were still missing. It would be a while yet before their bodies would be found. Water seems like something so innocent, but when they become flood waters, they become killer waters.