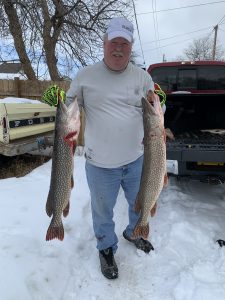 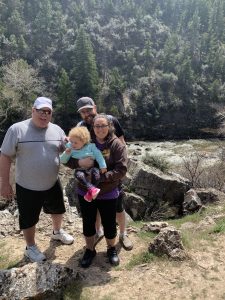 My brother-in-law, Mike Stevens, who has always liked fishing, had the opportunity this past winter to try something new, when he and his son, Garrett went ice fishing for the first time. The trip took them out on the Tongue River Reservoir, just outside Sheridan, where Garrett lives with his wife, Kayla and their daughter, Elliott. The spot they went to is just a couple of miles into Montana, next to the coal mines up there. Kayla’s grandfather has an ice shanty there. The morning was not very productive, other than lots of visiting, but they did see one Northern Pike, which Mike quickly speared. The fish, it turns out weighed 14 pounds…nice!! Since the fish didn’t seem to be hanging around that area, they decided to go down the ice to where Kayla’s uncle had a shanty. After just 10 minutes, they speared two smaller, approximately 9 pound Northern Pike, about 10 minutes apart. Then, 15 minutes later, a big 15 pound Northern Pike came in and swallowed the lure, they had to spear him to get him out of the water. Garrett tells me that Mike was “hooked after that first one and then having the other 3 come in so fast just solidified it.” They are talking about going again next year, and Garrett plans to build his own shanty. It is a wonderful new way for father and son to connect.

While Mike likes to fish, that is not the draw that Sheridan has on him these days. Garrett and Kayla and their daughter are the main reasons Mike and Alena want to go to Sheridan. Elliott is their first grandchild, and they are so in love with her. Having the kids live a couple of hours away has been hard on them, but with FaceTime, they are able to keep in touch, and they go to Sheridan as much as they can, to spend time with them. My sister tells me that whenever they FaceTime with the kids, Elliott asks for her Papa, but Alena is still sure that 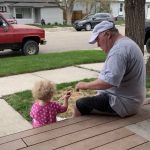 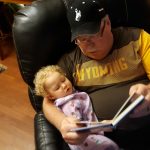 she loves her Namma the most, hahahaha!! I suppose Mike will argue that one.

Another new thing for Mike and Alena this year, was hiking is the Sheridan area. They hiked along the Tongue River, and Alena said it was an absolutely gorgeous day. I can totally relate, because my husband, Bob and I love to hike too. I haven’t spent much time near the Tongue River, but I suspect that Mike and Alena will find themselves hiking that area a lot more. Today is Mike’s birthday. Happy birthday Mike!! Have a great day!! We love you!!