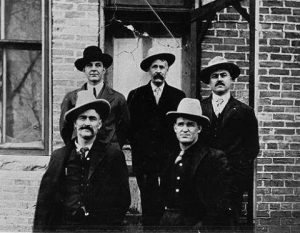 In the early years of Wyoming’s history, there was contention between cattle ranchers and sheep ranchers. The cattlemen thought the land was theirs, and they thought the sheepmen were invading their domain, and they weren’t going to allow it. Cattlemen were first to arrive in the Big Horn Basin, trailing in huge herds of cattle in 1879. They insisted their early arrival established a prior claim to the grass on the government land where their herds grazed. But the law said otherwise. The Cattle and Sheep Wars sprung from this dispute in the Western United States, but they were most common in Texas, Arizona, and the border region of Wyoming and Colorado. The cattlemen thought the sheep destroyed the public grazing lands, which they had to share on a first-come, first-served basis.

On April 2, 1909, the range war between the cattlemen and sheepmen in the Ten Sleep, Wyoming area came to a head, when a group of cattlemen decided that they were going to settle this battle once and for all. They headed to Spring Creek seven miles south of Ten Sleep, Wyoming where they knew of a camp. This was to be the last of the sheep raids in the Big Horn Basin. That fateful day, seven cattlemen attacked a sheep camp near 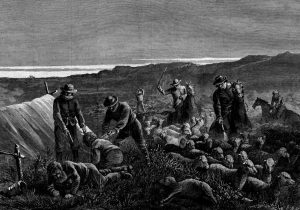 Spring Creek, just south of Ten Sleep, in the southern Big Horn Basin. When the raiders attacked, they killed three men, two of whom the burned to death in their sheep wagon. Then shooting the third man, the decided to kidnap two others. Then they killed the sheep dogs and dozens of sheep and destroyed thousands of dollars of personal property. It was the deadliest sheep raid in Wyoming history. I understand killing in war, but this was murder, and it was horrific!!

Wyoming was a territory from July 25, 1868 to July 10, 1890. Early on, there were more cattle ranches than sheep ranches, and the cattlemen felt like they had priority to public lands. Sheep raids began to plague Wyoming since the late 1890s, by which time sheep outnumbered cattle on Wyoming ranges. By 1909, at least six men had been killed, thousands of sheep had been slaughtered, and many thousands of dollars of property destroyed. Nevertheless, there had not been a single conviction for a crime committed during a sheep raid.

It’s really no surprise, given the rising numbers of sheep on the range in those years, that cattlemen were 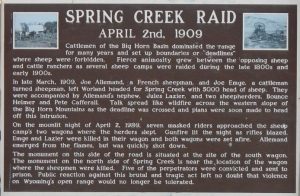 feeling pressured. By 1894 there were 1.7 million sheep in Wyoming and only 675,000 cattle. By 1909, the state’s peak year for sheep, there were more than six million sheep, and only 675,000 cattle. It makes sense that there were tensions, but that did not excuse the men on either side committing murder. Yes, Wyoming was a part of the wild west, and the lawmen were not always readily available, but that did not mean that these men should be able to kill the competition. We are ultimately, civilized people after all, even if we do live in the wild west. After the arrests for the Spring Creek Raid, the cattlemen we reluctant to raid the sheep camps, and with that, a horrific event of the old west passed into history.