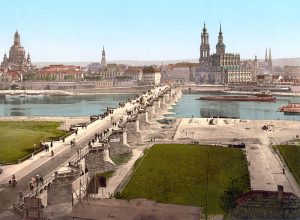 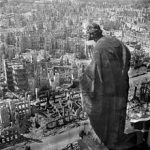 The American prisoners of war had heard the Allied planes pass overhead many times before, but this was different. Along with the sound of the planes, came the howling of Dresden’s air raid sirens. Dresden was known as the “Florence of the Elbe.” The American prisoners of war were moved two stories below into a meat locker. I don’t really understand that in light of the outcome. The Germans didn’t care about their prisoners, but I guess they didn’t care about their own countrymen either. Why would they move their prisoners to a place of safety, but leave the people of the town to fend for themselves. I suppose that they might have wanted the prisoners for leverage, but how good is a victory, if there are no one to live in the town.

In this instance, I suppose it didn’t matter, because when the prisoners were brought back to the surface, “the city was gone”…levelled by the bombs from the RAF and the USAAF. One prisoner, Kurt Vonnegut who was a writer and social critic, recalled the scene…shocked. The devastation was unbelievable, the bombing had reduced the “Florence of the Elbe” to rubble and flames. Still, Vonnegut could not help but be thankful that he was still alive. Who wouldn’t be thankful. He was alive, and he would be forever thankful. Who wouldn’t be. It was a second chance.

The devastating, three-day Allied bombing attack on Dresden from February 13 to 15, 1945 in the final months of World War II became one of the most controversial Allied actions of the war. Some 2,700 tons of explosives and incendiaries were dropped by 800-bomber raid and decimated the German city.
Dresden was a major center for Nazi Germany’s rail and road network. The plan was to destroy the city, and thereby overwhelm German authorities and services, and clog all transportation routes with hordes of refugees. An estimated 22,700 to 25,000 people were killed, in the attacks. Normally, Dresden had 550,000 citizens, but at the time there were approximately 600,000 refugees too. The Nazis tried to say that 550,000 had been killed, but that number was quickly proven wrong. 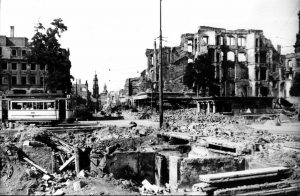 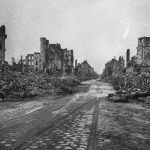 The Allied assault came a less than a month after 19,000 US troops were killed in Germany’s last-ditch offensive at the Battle of the Bulge, and three weeks after the grim discovery of the atrocities committed by Nazi forces at Auschwitz. In an effort to force a surrender, the Dresden bombing was intended to terrorize the civilian population locally and nationwide. It certainly had that effect in 1945.