It seems impossible to me that my mother-in-law, Joann Schulenberg could be gone now for two years. She was such a fighter, when it came to her health. There were a number of times that we thought we had lost her, but she always bounced back…until she didn’t. The end of her days had come, and with it, there were no parents in our lives again. My parents, Al and Collene Spencer and my father-in-law, Walt Schulenberg were gone, and now my mother-in-law had joined them in Heaven. It felt empty here on earth. The loss hit hard with each of my four parents, but with my mother-in-law, there was also the finality of it. We had no more parents. We, their children, are the matriarchs and patriarchs of our families now, but it feels like we are orphans. The knowledge that you have no parents, really brings that orphaned feeling home.

My mother-in-law, was a homemaker for most of her life, and very skilled in things like cooking, sewing, knitting, crocheting, and canning. These were things she passed down to her daughters, and to me. Of course, my own mother taught me part of these things too, but we didn’t can often, other than making jelly, and the things my mother-in-law cooked were different from my own mom, so that added variety to my abilities. My mother-in-law, was probably best known for her sewing, knitting, and crocheting. She sold many of her crafts at craft fairs over the years, adding to the family budget and to her craft budget as well. She also loved to bake, and her “Murder Cake” was a family favorite.

My in-laws lived in the country for most of the time I knew them, but they moved to town in the last years of their lives. While she preferred the quiet of the country, my mother-in-law did enjoy watching all the activity that took place near their home at the corner of two busy streets in In her later years, my mother-in-law developed Alzheimer’s Disease. Casper. After she had to be moved to Shepherd of the Valley nursing home, she 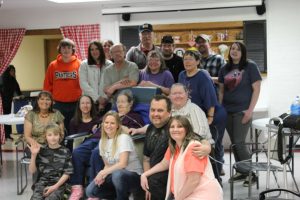 enjoyed the activity there, especially at the nurses station, because she was a “people watcher” all her life. She liked to see what everyone around her was up to, and figure it all out, even wondering why they spoke to the people they did, or did the things they did. I was glad that her curiosity never left her. It made her time in the nursing home must more interesting. Finally, on January 4, 2018, she lost her health battle. Like most Alzheimer’s patients, it was not the disease that took her, but rather that her kidneys gave out. She passed peacefully that evening, after having her family around her earlier in the day. She simply went to sleep, and went home. While we were so sorry to see her go, we knew she was tired of fighting. We love and miss her very much.

2 Responses to That Orphaned Feeling