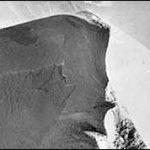 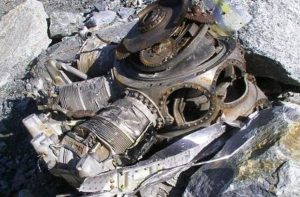 All seemed normal that January 24th, 1966 as the Air India Flight 101, a Boeing 707 was making its regular run from Bombay to New York, but it was not truly a normal flight at all. In reality, the plane was too low, and to make matters worse, there was a fog bank hanging over Mount Blanc in the Alps. There were 117 people onboard the plane, when it careened into the side of the mountain at 8:00am local time, hitting just fifty feet below the summit. If only they could have been fifty feet higher, it would have been just a very close call.

The plane was preparing to land at the Geneva Airport in Switzerland. Onboard was the Indian Atomic Energy Commission, Dr Homi Jehangir Bhabha, who was on his way to Vienna. Six passengers were British, and the rest were Indian nationals…46 of those were sailors. The plane was a few minutes behind schedule as it made its descent, but the captain of the Air India Boeing 707, was one of the airline’s most experienced pilots, and all seemed well. The pilot had radioed the control tower a few minutes earlier to report that his instruments were working fine and the aircraft was flying at 19,000 feet, which was at least 3,000 feet higher than the Mont Blanc summit…but he wasn’t, or he was descending faster than he realized.

Rescue teams were dispatched immediately, and they found wreckage scattered on the south-west side of the Mount Blanc, about 1,400 feet below the summit. Mountain guide, Gerard Devoussoux, who was one of the first to arrive at the crash site, said: “Another 50 feet and the plane would have missed the rock. It made a huge crater in the mountain. Everything was completely pulverized. Nothing was identifiable except for a few letters and packets.” The site was devastating, and I’m sure the rescue teams felt sick at the sight of it. Planes that crash seldom leave bodies in one piece. French authorities radioed back the news that there was virtually no hope of survivors shortly after landing in the area.

When inclement weather moved in, the search had to be called off. The bad weather and poor visibility made the rescue efforts impossible. The airport quickly filled with relatives of the passengers involved in the disaster, all of whom were in tears after airport officials broke the news of the crash. Robert Bruce, from Tooting, who was waiting for his parents to arrive, said: “I am so choked I cannot even cry. I will just go home and collapse. As far as I am concerned my world has come to an end.”

The cause of the crash was determined to be pilot error. The pilot misunderstood the directions he was given with devastating results. Another crash had occurred at the same place 16 years earlier, killing 48 people. The 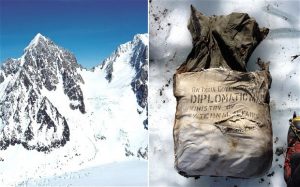 Alps are mountains that receive a lot of mountain climbing traffic every year. Over the years climbers have come across plane parts, as well as body parts. More recently, a young French alpinist approaching the summit of Mont Blanc, saw a metal box poking out of the ice and snow on the shoulder of western Europe’s highest mountain. The box contained precious gems…including emeralds, rubies, and sapphires…worth hundreds of thousands of euros. The box had been there for over 50 years. The honest climber turned the gems in to authorities, but no one has claimed them yet. If they remain unclaimed, the could be returned to the climber, who has not been named.