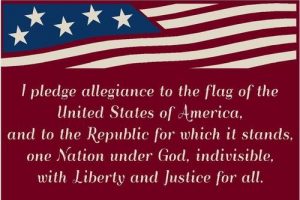 In a time of national turmoil, it has become trendy to disrespect the flag of the United States. It is all done supposedly to protest things like racism or police brutality, but in reality, the flag, and our allegiance to it and our nation have nothing to do with those causes. I agree with the rights of citizens to carry on a peaceful protest, but I don’t agree with this way of doing it…or burning our flag. Some people will not like this view of things, but I wonder why the flag is chosen as the avenue for these protests. These protesters don’t want to leave this nation. They know it would be crazy to do so, because they would never have the same kinds of freedoms they have here, especially the right to protest. That is fine, but they use flag is a means to grab attention, and that is where I disagree. A protest can be held, while still remaining in solidarity as a nation. People will listen when the nation is not disrespected.

heart. The statement of the pledge was specific, “I pledge allegiance to the Flag of the United States of America, and to the Republic for which it stands, one Nation under God, indivisible, with liberty and justice for all.” The pledge is a statement of a people who are proud to be Americans. I know that these days, there are those who are not “proud to be Americans,” and to that I say, “Then leave!!” Our citizens are not prisoners here. They are free to travel…free to leave, so if you don’t love this nation, then go.

I realize that while the people using our flag and our pledge don’t want to leave, they just want to disrespect it. Oddly, many of them would disagree with that statement, but to use the flag and the pledge as part of a protest is, in my opinion, disrespectful to our nation. There are many other ways to protest, and if these people want the support of the nation for their protest, they need to understand that disrespecting the nation that the people love, will not get the backing of the masses. The people are so angry about the disrespecting of the flag, pledge, and nation, that they don’t even listen to the “meat” of the protest. The avenue they have chosen 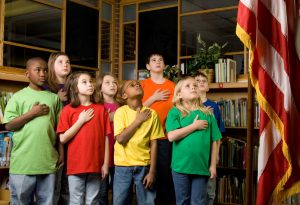 completely defeats the purpose of the protest.

We, the people of the Unites States of America must turn back to allegiance to this nation that was created “under God” and find another avenue in which to protest the things about it, of which we disapprove. Change can happen, but we must put the masses on our side to affect change, not turn them against us and the things we protest. On this day, the 74th anniversary of the day when we first recognized our Pledge of Allegiance, I ask those who would protest, to turn from using the flag and pledge as an avenue to a protest, and use methods of honor and not dishonor.

2 Responses to I Pledge Allegiance