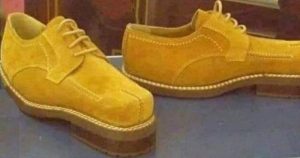 The life of a spy is a dangerous one. Getting caught spying is often punishable by death, so the key to being a successful…and later old spy, is not to get killed, and therefore not to get caught. The spies had a number of way so fool the Nazis. One of the ways was to research the proper clothing for the area and the times, and make sure that the clothing of the spy didn’t stand out as being foreign or outdated. To miscalculated that aspect of the spy, could mean certain death.

Clothing wasn’t always the concern. When a spy is being followed, footprints can be very telling. One of the ways that the spies fooled the Nazis was the spy shoes they wore. The shoes were very functional as a way to disguise what was going on, but the looked hilarious. The idea of the shoes was to make the person following the spy think that 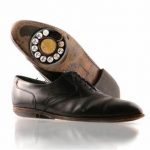 the spy was going the opposite direction from that which the spy was really going. Basically, the shoe was put on the sole backwards. That way, the person following the spy, would think he was walking toward the spy, when he was actually walking away from him. The technique gave the spy precious time to get far away from the enemy who was tracking him. The only problem for the spy was the shape of the shoe. It seems to me that the shape of the shoe would feel very odd to the spy. Nevertheless, the shoe was necessary, and so the spy got used to it. I suppose the feeling was similar to a child putting their shoes on the wrong feet. It is thought that the shoes might have first been used by Moonshiners during the prohibition period.

Our more modern day thought concerning spy shoes and other equipment is probably far more advanced. The shoes might have contained a knife in the heel or even a shoe phone, like Maxwell Smart…on the show “Get 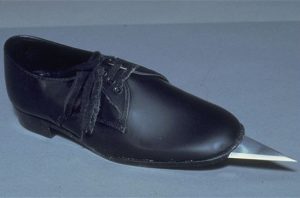 Smart.” Of course, much of that is fiction, and I don’t know if real modern day spies even use special shoes or any other special spy tools, for that matter. The Backward Spy Shoes were a very simple tool, but it would seem that they were highly effective during World War II. The only problem I see with a shoe that takes a tracker back to the starting point of the spy who is being pursued is that it would make it impossible to return to the point of origin for fear of being tracked there. Of course if the spy walked to a public place, like a train station, and then switched shoes, they could easily get lost in the crowd, never to be found. Either way, the shoes were a clever way to outsmart the enemy.