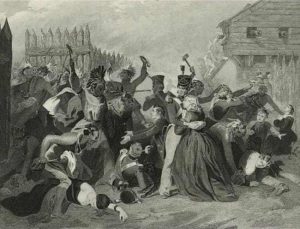 Most of us learned about Davy Crockett in school, but I don’t think that most of us really knew very much about him. Davy Crockett was an incredibly “macho” man. He was also an incredibly loyal man. During the War of 1812, the Creek Indian tribe split into factions. I suppose they thought to divide and conquer. One group, the Red Sticks, attacked Fort Mims on August 30, 1830, taking the lives of militiamen, civilians, and Creek allies. The Fort Mims massacre brought national outrage. Many men began to volunteer to fight the Creek Indians. Davy Crockett was among them. Crockett recalled, that he “had none of the dread of dying that I expected to feel,” but his wife, Mary “Polly” Finley did not share his optimism. She was terrified of losing her husband, and begged him not to go. Crockett felt obligated, and he did go. While he was off fighting, Polly became ill and passed away shortly after his return home. Crockett had 3 children with Polly…John Wesley, William, and Margaret.

Losing Polly was very hard, but as often happened in those days, marriage after the loss of a wife came out of necessity. Davy needed someone to care for his children. He met a widow woman, Elizabeth Patton, who had children, and who lived nearby. Circumstances being what they were, Crockett began to visit the woman and after discovering his “company wasn’t at all disagreeable to her,” he decided he “could treat her children with so much friendship as to make her a good stepmother.” They married a short time later.

Crockett decided to move his family to Texas, but Elizabeth, while fine with that, asked that he go first to prepare things, and make sure he liked it there before they moved the family. It was probably a good thing in retrospect. Crockett arrived in East Texas in January 1836. He traveled through Nacogdoches and San Augustine before arriving in San Antonio. By the time he got there, the Texas Revolution was in full swing, and included thousands of Mexican troops led by Antonio López de Santa Anna. Their goal was to stop the Texas 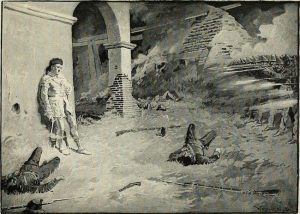 independence movement. The battle was fierce, and in the end, approximately 200 Texas militiamen were hunkered in at the Alamo when Santa Anna and his men arrived in February 1836. Crockett and the other men inside gathered supplies and did their best to prepare for the coming siege. Crockett was said to have helped with moral by making jokes and telling stories. The siege of the Alamo lasted 13 days, with the severely outnumbered Texans holding out until the walls of the compound were breached on March 6. As we all know, the men and women inside were all killed. Crockett was also killed, and that left Elizabeth widowed for a second time, but with more children this time. Still, by not taking the family, their lives were spared. Davy Crockett died at the age of 50 years.