The Love Of Parents 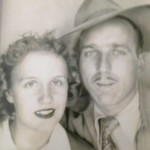 Thinking of my parents, Allen and Collene Spencer on their 66th wedding anniversary, the first thought that comes to mind is that it has been so very long since I’ve seen them. I wonder how the years could have gone by so fast. My dad has been in Heaven since 2007, and my mom since 2015. It seems like forever…probably because we have missed them every day since they have been gone. That’s how it goes with your parents, I think. While they are gone from this Earth, they are never gone from the hearts of the children who love them. They gave you life, nurtured you through your childhood years, and then let you spread you wings and fly free. They didn’t stifle your dreams, even if it meant that your were far away from them. That is the love of parents.

My own parents were all that and more for my four sisters and me. They were our rock, grounding us with their teachings and their faith in God. We always knew that no matter what happened or what mistakes we might make, they were there for us. They always had the answers we needed to resolve any situation. We would always view our lives as perfect. It didn’t matter what we might face later in their lives, or what they might need from us, we would always be there for them, just as they were for us. In fact, we never expected that they would need help from us. They seemed invincible. I suppose that is what made it so hard to face the day they went to Heaven. The knowledge that the world as we knew it would never be the same for us again, stunned us to our very core. It had not occurred to us that we would live on this Earth without parents, even if it should have. Still, once again, their teachings sustained us and, just as they knew we would, we were able to move forward in our lives. They had raised us to become independent women, after all. They knew that we would step up and become the new matriarchs of the family, bring the next generation forward to their own independence, so they could, in turn, raise their children to that level and so on. That was still part of the love of parents for their children.

candy, but when you had a loving, solid marriage, it was always rewarding. Their years together, though cut short when Dad passed away in 2007, were filled with love and stability. The married years they spent on this Earth were 53 years, but while people are not married in Heaven, they will always love each other. Today would have been my parents 66th wedding anniversary. I know they are enjoying time together in Heaven, and it is a joyous day. Happy 66th anniversary in Heaven, Mom and Dad!! We love and miss you very much, and we will see you in the future.