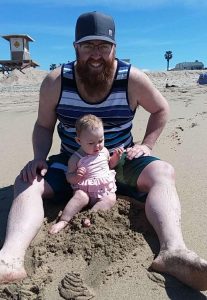 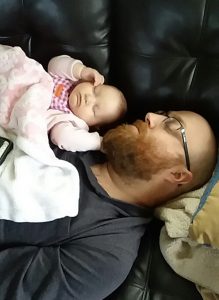 My nephew, Garrett Stevens has had a great year. It has been a year of great change for him and his wife, Kayla, who welcomed their first child on August 3, 2018. Their daughter, Elliott has been the answer to prayer for both of them. For as long as I can remember, Garrett has loved kids, and Kayla has too. Now that he has a child of his own, Garrett is on cloud nine. He is a great dad, and a great husband.

This summer has been a busy one for Garrett and Kayla. Kayla was a bridesmaid in a wedding earlier that took the family to Huntington Beach, California. They had a great time enjoying the sun and sand. They went sight seeing, and just had a great vacation. This past weekend, Kayla had to go out of town for the weekend, and so Garrett found himself being Mister Mom. I think he would have had no problem taking care of Elliott alone, but he wanted to give his mom a chance to join in, and since it was Elliott’s first time away from her mommy, Garrett might have been just a little bit nervous. Having his mom there would help, in the event that Elliott was fussy. He needn’t have worried. It all went very well, and Garrett and his mom had a good visit too. It was a sweet gift he could give to his mom, my sister, Alena Stevens. 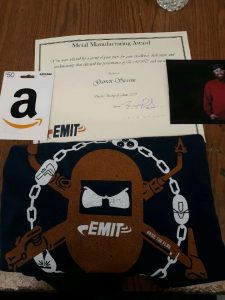 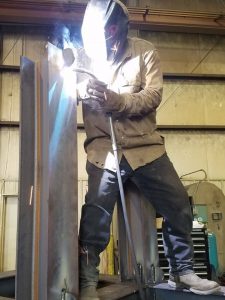 Garrett has been working hard, and making great strides in his career too. Garrett took after his grandpa, my dad, Allen Spencer, when he decided to become a welder. Garrett went to college for his chosen field, and he is very good at it. Garrett works at EMIT Technologies, Inc in Sheridan. Kayla told me that Garrett made her very proud yesterday, when he won an award for his work. She told me that Garrett’s boss, Will said that he has never seen a new hire come in and hit the ground running as hard as Garrett has and he was impressed with how Garrett is making changes to products to make them better!! Compliments from bosses just don’t get better than that. Today is Garrett’s birthday. Happy birthday Garrett!! Have a great day!! We love you and we’re very proud of you!!