A Great Day For The Allies 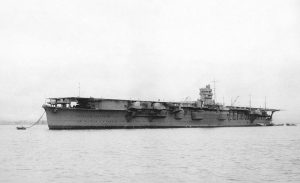 The Japanese had a tendency to be sneaky about their weapons of warfare, and their attack plans, as we know from Pearl Harbor. One such well kept secret was the Hiryu…which means Flying Dragon. The ship was a modified Soryu design that was built exclusively for the Imperial Japanese Navy. The Soryu, which means Blue Dragon, was built first, and because of the heavy modifications, the Hiryu was almost considered to be a separate class of ship. Hiryu had a displacement of 17,600 tons, length of 746 feet 1 inch, beam of 73 feet 2 inches, draft of 25 feet 7 inches and a speed of 34 knots. Built in 1931, “these two ships became prototypes for almost all subsequent Japanese carriers. They had continuous flight deck, two-level hangar, small island superstructure, two deflexed down and aft funnels and three elevators. As a whole ship design (within the limits of displacement assigned on it) has appeared rather successful, harmoniously combining high speed with strong AA armament and impressive number of air group.” The Hiryu, unlike the small height hangar levels of the Soryu, was built to an advanced design. “Her freeboard height was increased by one deck, island was transferred to a port side (Hiryu became second after Akagi and last Japanese carrier with an island on a port side). Breadth of a flight deck was increased on 1m, a fuel stowage on 20%. She had a little strengthened protection: belt thickness abreast machinery raised to 48mm.”

Hiryu took part in Japanese invasion of French Indochina (Now Vietnam, Cambodia and Laos) in mid 1940s, the attack on Pearl Harbor and the Battle of Wake Island. The ship became a great enemy of the Allies. Then, along with three other fleet carriers, Hiryu participated in the Battle of Midway Atoll in North Pacific Ocean in June 1942. Initially, the Japanese forces managed to bombard US forces on the atoll. It didn’t look good for the 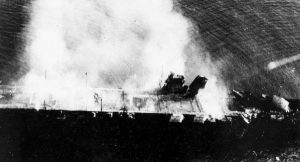 Allies, but on June 4, 1942, the Japanese aircraft carriers were attacked by dive-bomber aircraft from USS Enterprise, USS Yorktown, USS Hornet, and Midway Atoll. Hiryu was hit and severely crippled, and was set on fire. Japanese destroyer Makigumo torpedoed Hiryu on June 5, 1942 at 05:10 am, because she could not be salvaged. Only 39 men survived as after 4 hours, she sank with bodies of 389 men. Three other Japanese carriers were also sunk during the Battle of Midway. It was a battle that brought Japan’s first naval defeat since the Battle of Shimonoseki Straits in 1863. It was a great day for the Allies.