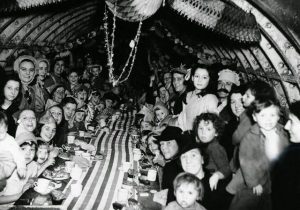 When disaster strikes, and homes are in ruin, people try to come together to help return a sense of normalcy to the people affected by the disaster. Disasters happen quickly, and the devastation is often heavy. It is a difficult thing to help people heal. While one disaster or event is often the same as another in terms of damage, something we somehow don’t connect to that same kind of devastation, is war. I’m not sure why, but when I think of war,I picture a battle held in the middle of a vast desert, with no civilization in sight. of course, when I really think about it, I now that is not reality, but rather my mind trying to fit war into a box of civility. In reality, there is nothing civil about war. Gun shots, bombs, and land mines aren’t picky about who they hit. Soldier or civilian…all are fair game in a war. And towns…well, there is often little to nothing left after a bomb hits.

During World War II, London was often the targets of the German Luftwaffe, and the bombs they dropped, devastated many parts of London. From September 7, 1940, London was systematically bombed by the Luftwaffe for 56 out of the following 57 days and nights, in what was called “The Blitz.” Most notable was a large daylight attack against London on September 15th. Of course, these weren’t the only bombings, and the people of London didn’t know when or if it was safe to be out of the bomb shelters. Life in London had taken on eerie gloom,as people continued to seek refuge in the bomb shelters, because that was the only safe place to be. The biggest problem was that the bomb shelters were also gloomy, boring, and generally depressing. The children probably suffered the most, because kids don’t really understand all this hatred and killing. Their world had been turned upside down…and they didn’t know why.

By the end of 1940, 24,000 civilians had been killed in the Blitz and hundreds of thousands made homeless. In November, German bombers had obliterated Coventry city center and there had been particularly fierce raids on Manchester and Liverpool in the days leading up to Christmas. The public were now mourning the loss of their loved ones on the home front and in combat, as well as praying for the 41,000 British soldiers captured on the continent, but it was the children, in my mind, who suffered the most. Their childlike innocence was completely destroyed, along with their homes. Their parents, and other adults made the decision to change their little world, even if it was only for a short time. They didn’t have much, but they put together whatever they could to lift the spirits of these scared children. Christmas parties were held for the children and the shelter walls were decorated with paper chains and decorations, while amateur singing nights, discussion groups, and sewing circles were held regularly.

In order to avoid the bombs, many families spent some of the holidays in air-raid shelters and other places of refuge. They decked out their temporary homes with makeshift decorations…and very short Christmas trees because of the height of the shelters. Even if gas or electricity was available, Christmas dinner would have still been an amazing feat, because turkey was so expensive. Most people made do with other cuts of meat, which were still expensive. A family of four’s weekly meat ration probably wouldn’t even cover the cost of a small chicken. One alternative was home-raised chickens or rabbits, much to the shock of young children who often regarded them as pets. Home-grown vegetables and chutneys would have also made the table. Rations were 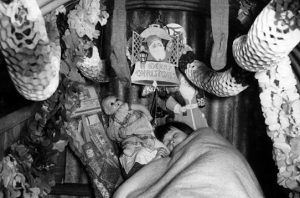 scrimped and saved including ham, bacon, butter, suet, and margarine. The tea and sugar rations were increased in the week before Christmas. Very little fruit was imported and nuts were very costly. Consequently, cooks had to improvise Christmas cakes and puddings devoid of dried fruit and marzipan, using instead sponge or other unlikely ingredients. Alcohol was available but, horribly expensive. And there would be no after-dinner French cheeses or brandy due to the German occupation. It was a poor Christmas party in comparison to those in the past, but it served to remind all the people that Christmas is more about the blessings in life, than it is about the things we are given.