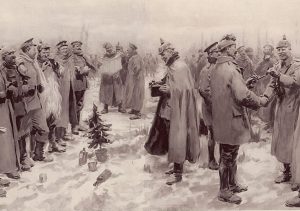 It was 1914, and World War I was in the 5th month of a 51 month offensive. The war effort was in a bit of a transition period, following the stalemate of the Race to the Sea and the indecisive result of the First Battle of Ypres. As leadership on both sides reconsidered their strategies, hostilities entered a bit of a lull. The men were hoping for a break in the action for Christmas that year, but they had to wait for their orders. When the orders came down, it was not to be a Christmas truce, but rather a Christmas strike. As the first men to go forth prepared to make the first advances, some men were killed, and some returned. It was the way of war. The leadership wanted to take advantage of the possibility that the enemy might not expect a Christmas attack. One of the younger men…17 years old to be exact, couldn’t help himself. He began to sing Silent Night.His superiors ordered it to be quiet. They feared that the enemy was waiting in the darkness.

Then, a miracle occurred. In the week leading up to the 25th of December, French, German, and British soldiers crossed trenches to exchange seasonal greetings…and to talk. In some areas, men from both sides ventured into what was called no man’s land, because to go there was to risk death. Nevertheless, on that Christmas Eve and Christmas Day, things seemed different. The soldiers took a chance and stepped forward, hoping to convince their enemies that they only wanted to bury their dead, and hoping that it would be 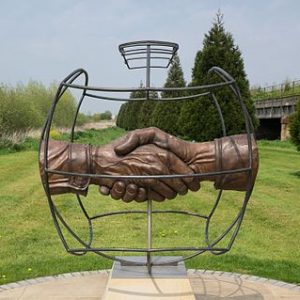 agreeable to stop the fighting for one hour to bury the dead. As they buried their dead, with heavy hearts, someone suggested that they take Christmas Day off. This was totally against their orders, and they knew that at some point they were going to have to go back and follow their orders. They were going to have to become enemies again. Still, for now…for this day, they mingled and exchange food and souvenirs. There were joint burial ceremonies and prisoner swaps. Men played games of football with one another, giving one of the most memorable images of the truce. Peaceful behavior was not ubiquitous, however, and fighting continued in some sectors, while in others the sides settled on little more than arrangements to recover bodies. Several meetings ended in carol-singing. Someone commented, “How many times in a life do you actually meet your enemy face to face.” It was almost strange to them, because these “enemies” were not the monsters they expected them to be. These were simply men, just like they were. I’m sure the men were in shock. it’s hard to have your total view of your enemy change so drastically and then have to follow your orders, pickup your weapons, and shoot at the same men again. The Christmas truce (German: Weihnachtsfrieden; French: Trêve de Noël) was a series of widespread but unofficial ceasefires along the Western Front of World War I around Christmas 1914.

The Christmas Truces of 1914, while wonderful for the men, were not to be a Christmas tradition in World War I. The following year, a few units arranged ceasefires but the truces were not nearly as widespread as in 1914. 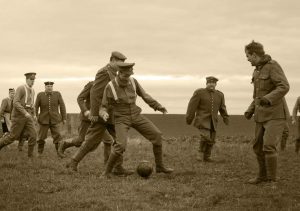 This was, in part, due to strongly worded orders from the high commands of both sides prohibiting truces. It was evident that while the mini-mutiny of 1914 was tolerated and the men were not punished, that this would not be tolerated in the future. It really didn’t matter, because the Soldiers were no longer amenable to truce by 1916. The war had become increasingly bitter after devastating human losses suffered during the battles of the Somme and Verdun, and the use of poison gas. While a Christmas truce would be nice in theory, bitter and angry feelings on both sides of a war make it an impractical idea. Still, in 1914, the miracle of the Christmas Truce was a wonderful treat for the men on all sides of a bitter war.