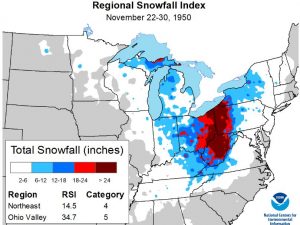 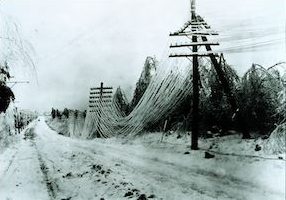 As winter arrived in Coburn Creek, West Virginia in 1950, a storm of epic proportions was about to set some serious records. From November 22 to 30, a slow-moving, powerful storm system dumped heavy snow across much of the central Appalachians. The storm would be remembered as as “The Great Appalachian Storm of 1950,” and it blanketed areas from western Pennsylvania southward deep into West Virginia with over 30 inches of snow. Several locations even received more than 50 inches of snow. Coburn Creek, West Virginia, reported the greatest snowfall total…a staggering 62 inches. Most towns can be shut own with 24 inches, so 62 inches was unthinkable. There is no way a car can get through that, in fact it will take hours to get a snowplow through it. For all intents and purposes, much of the Appalachian Mountains, and especially the Coburn Creek area were at a standstill.

The cold front was massive, with frigid air stretching from the Northeast into the Ohio Valley and all the way down into the far Southeast. Temperatures fell to 22°F in Pensacola, Florida, 5°F in Birmingham, Alabama, 3°F in Atlanta, Georgia, and 1°F in Asheville, North Carolina. This record cold led to widespread crop damage, particularly in Georgia and South Carolina. In the north, intense winds associated with the storm caused extensive tree damage, power outages, and coastal flooding in New England. In New Hampshire, Mount Washington observed gusts as high as 160 mph. And, onshore winds along the coast caused extreme high tides and flooding in New Jersey and Connecticut. The storm was fairly short lived, and the temperatures quickly returned to normal in the first week of December 1950, bringing a whole new problem with them. The rise in temperatures led to a fast snowmelt, flooding several tributaries and major rivers. The Ohio River reached 28.5 feet, 4 feet above flood stage, in Pittsburgh. In Cincinnati, it reached 56 feet, also 4 feet above flood stage.

At the time, the Great Appalachian Storm of 1950 was one of the costliest storms on record, and it contributed to at least 160 deaths. Overall, on the Regional Snowfall Index (RSI) this powerful storm ranked as a Category 5…the worst category, for the Ohio Valley, and a Category 4 for the Northeast of the 212 storms our scientists have analyzed for the region. The RSI value of 34.7 securely locks its first place rank, well above the 24.6 RSI value second worst storm in March 1993. Only four Category 5 storms have impacted the Ohio Valley since 1900, so it is highly uncommon. During the storm, Pittsburgh, Pennsylvania, received 30.2 inches of snow, and both Erie, Pennsylvania, and Youngstown, Ohio, received more than 28 inches of snow. Across the region, over 18 inches of snow affected more than 6.1 million people. Such high snowfall totals affecting so many people largely contributed to the storm’s high ranking on the RSI scale.

In the Northeast region, the Great Appalachian Storm ranks as the ninth worst storm to impact the area out of the 203 analyzed. That fact seems surprising given the severity of the storm. I would have expected a much higher ranking. Over 30 inches of snow affecting 1.3 million people in the region largely contributed to the regional RSI value of 14.5. With that value, it ranks just behind the more recent February 2003, February 2010, and January 2016 storms. The late February snowstorm of 1969 remains the strongest storm to hit the 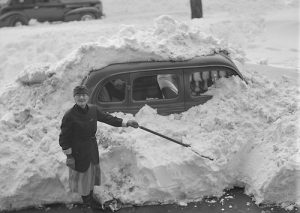 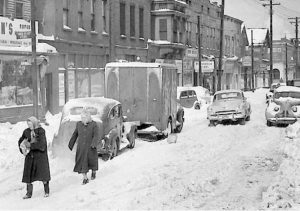 Northeast, with an RSI value of 34.0 making it a Category 5 or “Extreme” event. The March 1993 “Storm of the Century” remains the second strongest snowstorm to hit the Northeast, with an RSI value of 22.1 also making it a Category 5 event. As I look out my window at the light snow falling, I find myself feeling grateful that this storm is not expected to be anything like the Great Appalachian Storm of 1950.