A Boy And His Wheels

I didn’t know my husband’s Uncle Butch Schulenberg when he was young of course, but I have had the opportunity to get to know him over the past few years, and I feel very privileged to know him. He is a kind and loving man, who loves his family very much. I think that when it comes to his grandchildren, he is probably a big teddy bear, and I think they all know it. Of course, he would never admit it, but his family knows. 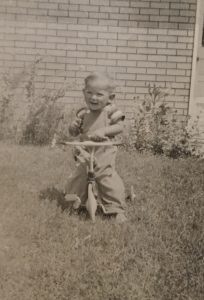 As a young boy though, the youngest of his dad’s children, I think he must have been quite a kid. I don’t know if growing up as the sheriff’s son would have made him think he could get away with more than most people, but I think he might have had a side of him that might consider trying it to see how things went. Of course, not as a little boy. From what I’ve seen in the pictures he let me copy, he was a little boy who maybe liked his wheels. I found a picture of him on his tricycle, and later a picture of him with a car. The boy going from one set of wheels to another. It looked like a 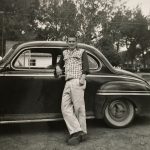 pretty nice car to me. I imagine he was well liked in high school…and I can see why people liked him, because he is a very likable guy.

Not much has changed with Butch, at least not in his personality. He is still the kind of guy you want to be around. He always has nice things to say about people, and he always makes you feel welcome. Anyone who knows him feels blessed to know him. I haven’t known him well for my whole time in this family, but I consider him to be one of my very favorite people. And today is Butch’s birthday. Happy birthday Butch!! Have a great day!! We love you!!

2 Responses to A Boy And His Wheels