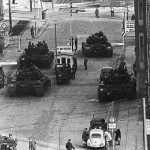 It seems there is always talk of the Third World War coming, and what might set it off. Most people hope that it stays all talk, because the weapons that are available these days could potentially wipe the human race off the planet, or at the very least, wipe whole nations off the map. Sometimes I wonder how we have avoided it so far, considering all the hate in the world today. Somehow our world leaders have held it off…for now. Nevertheless, there have been times when we have come very close to the last straw that would bring World War III. For 16 hours, between October 27 and October 28, 1961, at the height of the Cold War, US and Soviet tanks faced each other in divided Berlin in an action that brought the two superpowers closer to kicking off a third world war than in any other cold-war confrontation, with the exception of the Cuban missile crisis one year later. It was a very heated time in history.

Washington and its British and French allies had failed to stop the Russians from building the Berlin Wall in August of 1961. By October, East German officials began to deny US diplomats the unhindered access to East Berlin that they were required to allow as part of the agreement with Moscow on the postwar occupation of Germany. Then, on 22 October, E Allan Lightner Jr, the senior US diplomat in West Berlin, was stopped by East German border guards on his way to the state opera house in East Berlin. The East Germans demanded to see his passport, which he insisted only Soviet officials had the right to check. The situation grew more heated with this exchange. Lightner was forced to turn back.

General Clay, who was an American hero of the 1948-1949 Berlin Airlift was sent by Washington to deal with the Russians after the erection of the Berlin Wall. He gave orders that the next American diplomat entering East Berlin be escorted by armed US army military police in jeeps. The maneuver succeeded, but the East Germans continued to attempt to assert their claim to control western allied officials entering East Berlin. Never one to suffer defeat easily, Clay ordered American M48 tanks to head for Checkpoint Charlie. There they stood, some 80 yards from the border, noisily racing their engines and sending plumes of black smoke into the night air. Alarmed by the apparent threat, Moscow, with the approval of the Soviet leader, Nikita Khrushchev, sent an equal number of Russian T55 tanks rumbling to face down the Americans. They too ground to a halt some 80 yards from the East/West Berlin border and, as with the US tanks they faced, stayed there for 16 hours.

American officials were becoming more and more alarmed by the potential consequences. General Clay was quickly reminded by Washington that Berlin was not so “vital” an interest to be worth risking a conflict with Moscow. President Kennedy approved the opening of a back channel with the Kremlin in order to defuse the situation that had blown up. As a result, the Soviets pulled back one of their T55s from the eastern side of the border at Friedrichstrasse and minutes later an American M48 also left the scene. That was how it went until all the tanks were withdrawn. General Clay’s reputation among West Berliners rose, but not so much his warrior capabilities as far as the united States was concerned. Khrushchev had been equally uninterested in risking a 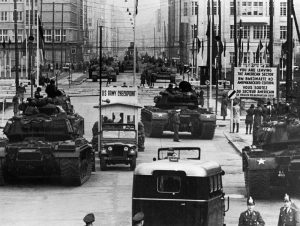 battle over Berlin. In return for Kennedy’s assurance that the west had no designs on East Berlin, the Soviet leader tacitly recognised that allied officials and military personnel would have unimpeded access to the East German capital. From that point on, the western allies freely dispatched diplomats and military personnel to attend the opera and theater in East Berlin. Soviet diplomats, too, attended functions in West Berlin and sent Volga limousines packed with Soviet military police on patrol to West Berlin. The elaborate routine served to prove that the Four Power status of the city was intact. It was faithfully observed until the Wall fell in 1990. they weren’t as eager to start World War III as they thoughts they were.